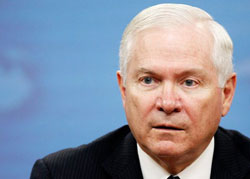 “Iran is combining ballistic and cruise missiles, anti-ship missiles, mines, and swarming speedboats in order to challenge our naval power in that region,” Gates told a conference of U.S. Navy advocates outside Washington.

Gates did not elaborate on the perceived Iranian threat.

His remarks were part of a review of budget and shipbuilding trade-offs facing the U.S. Navy and Marine Corps, and they came the same day that Iranian President Mahmoud Ahmadinejad spoke at the United Nations in New York.

Gates said last week he was satisfied with the pace of U.S. planning to thwart Iran’s nuclear program, which the United States and other Western nations suspect is aimed at developing atomic weapons. Iran says the program is to generate electricity.

Pentagon planners have been drawing up military options in case President Barack Obama opts to use force against Tehran. U.S. leaders repeatedly have said that would be an option of last resort if sanctions and diplomacy failed.