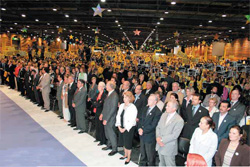 Paris, Jun. 07 – The Iranian opposition plans to hold a major rally near Paris in the last week of June, organisers tell Iran Focus.

Organisers expect tens of thousands of exiled Iranians, mostly from European countries, to attend the gathering, planned for 26 June in Taverny, a suburb of Paris. Some are expected to travel from as far as the US and Australia.

The location for the event spans three football fields, organisers say, and it is expected to be the largest-ever gathering of Iranians outside of Iran.

Parliamentary delegations are expected to attend from numerous Europeans countries to declare support for the goals of the meeting.

“Domestically and internationally, Iran is at an incredibly sensitive and perhaps historical stage”, a spokesperson for the event told Iran Focus.

“The situation in Iran is explosive and the regime has stepped up suppression and imposed severe censorship to conceal its crises and the depth of public anger and dissatisfaction. The event is a great opportunity for Iranians to demonstrate their unity and solidarity in the face of the ruling theocracy and convey their message to the world community”.

“Participants will be presenting an Iranian solution to the Iran crisis. So, anything short of such an unprecedented event would be inappropriate for delivering that message”, she said.

AFP: Syria said on Friday plans by Turkey to...