US will fail in ‘bullying’ Iran: ex-president 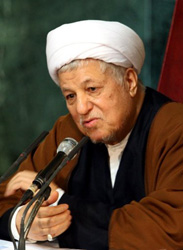 “The world arrogance (US) is trying to intimidate countries of the region, so they go along with bullying policies against Iran, but will not succeed in this act,” Rafsanjani said at a session of the Expediency Council, Iran’s top political arbitration body which he heads.

“It is an overt, bullying action against Iran when the US president officially announces that they are targeting the heart of Iran’s nuclear programme,” the powerful cleric said, citing Obama.

On Thursday, Obama signed into law the toughest ever US sanctions on Iran aimed at choking off Tehran’s access to imports of refined petroleum products like jet fuel and curbing its access to the international banking system.

Obama said the measures, which came on top of new UN Security Council and European sanctions, showed “we are striking at the heart of the Iranian government’s ability to fund and develop its nuclear programmes.”

“There should be no doubt — the United States and the international community are determined to prevent Iran from acquiring nuclear weapons.”

The US Senate and House of Representatives approved the legislation — which backers described as the toughest ever against the Islamic republic — by crushing margins of 99-0 and 408-8.

Rafsanjani has been supporting Iran’s opposition since the re-election of President Mahmoud Ahmadinejad in June last year.

The opposition movement continues to refuse the re-election of Ahmadinejad, saying the presidential poll was massively rigged to ensure the hardliner’s victory.

Dubai is the ‘hole in the net’ of sanctions on Iran

AP: The Obama administration is lifting sanctions it imposed...