AFP: Iranian President Mahmoud Ahmadinejad will visit Lebanon after the Muslim fasting month of Ramadan, a top official said Sunday, as Tehran pledged its support to Beirut and Damascus in face of any “aggression” from Israel. 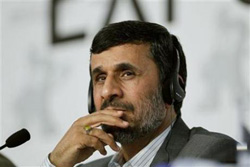 TEHRAN (AFP) — Iranian President Mahmoud Ahmadinejad will visit Lebanon after the Muslim fasting month of Ramadan, a top official said Sunday, as Tehran pledged its support to Beirut and Damascus in face of any “aggression” from Israel.

“The president will go to Lebanon at the first occasion after Ramadan,” Foreign Minister Manouchehr Mottaki said at a joint news conference with his visiting Lebanese counterpart Ali al-Shami.

The holy month, during which the Muslim faithful abstain from eating, drinking, smoking and having sex during daylight hours, is expected to begin on Thursday in Iran, depending on the sighting of the new moon.

The last visit by an Iranian president to Lebanon was by reformist Mohammad Khatami in May 2003, while Lebanese President Michel Sleiman had visited Tehran in November 2008.

Mottaki also pledged Iran’s support to Lebanon and Syria against any threats from Israel.

“The government of the Islamic republic and the Iranian nation are standing with the Lebanese and Syrian governments and nations against the aggression and threats of the Zionist regime,” Mottaki said.

He said Iran was holding continuous consultations with Beirut and Damascus and Tehran is “ready to answer positively any request from its brothers.”

Mottaki and Shami lashed out at Israel as they condemned the Jewish state for the recent clashes along the Israel-Lebanon border and the May 31 raid by its commandos on an aid flotilla heading to the blockaded territory of Gaza.

“The survival of the Zionist regime is facing serious problem,” Mottaki said in comments translated by the English language Press TV channel.

Shami, who acknowledged Iran’s support over the Arab-Israel issue, added that “Israeli aggression is due to its hostile nature.”

On August 4, a deadly firefight on the border between Israel and Lebanon, took the lives of an Israeli colonel, two Lebanese soldiers and a Lebanese journalist.

The May 31 Israeli raid on the aid flotilla left nine pro-Palestinian activists dead and sparked an international outcry against the Jewish nation.

Reuters: The United States is concerned Iranian appeals to...