BBC: A British man has died in a road crash as a charity car rally passed through Iran, the Foreign Office has said. 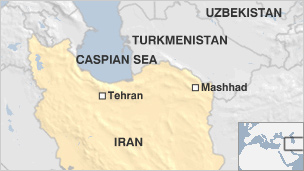 A British man has died in a road crash as a charity car rally passed through Iran, the Foreign Office has said.

A second British man in the vehicle and another member of the same team in the Mongol Rally are in hospital and in a stable condition. The accident happened on 6 August in the city of Mashhad.

Participants take their own routes via Europe, Central Asia and the Middle East to Mongolian capital Ulaan Baatar.

A spokesman for the Mongol Rally’s Bristol-based organisers, The Adventurists, said the team was involved in a “serious traffic accident”.

He said: “We are deeply saddened to announce the death of a participant taking part in the Mongol Rally 2010.

“Our deepest sympathies and thoughts are with the family and friends of the deceased at this difficult time.”

The spokesman said the families of those involved had been informed and that no further information about the identity of the team or further details of the accident would be released unless they instructed him to.

The rally, which set off from the Goodwood motor circuit in West Sussex on 24 July, is made up of teams in cars with an engine size of less than one litre and emergency vehicles.

Organisers say the event has so far raised more than £378,000 for charities working for children and rural communities in Mongolia and other countries.

Reuters: Iran's judicial authorities have launched investigations based on...