Barack Obama ‘may be prepared to meet Iranian president’

Daily Telegraph: Barack Obama’s national security adviser, Gen James Jones, has indicated the President may be prepared to meet Mahmoud Ahmadinejad if the regime resumed negotiations over its nuclear programme.

Barack Obama’s national security adviser, Gen James Jones, has indicated the President may be prepared to meet Mahmoud Ahmadinejad if the regime resumed negotiations over its nuclear programme.

By Robert Winnett in Washington 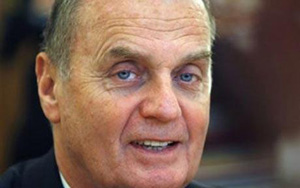 The retired general also indicated that the return of three American hikers held in Iran for the past year would be an “important gesture”.

Earlier this month, Mr Ahmadinejad requested face-to-face talks with Mr Obama during the UN General Assembly meeting in New York. The White House had appeared to rule out any meeting.

However, in an interview with CNN, Gen Jones said “the door’s open” if the Iranians agree to resume talks with the International Atomic Energy Agency.

When asked whether Mr Obama may meet the Iranian leader, Gen Jones said: “Ultimately if we find a convergence of paths all things are possible.

“One thing they might do is return our three hikers. That would be an important gesture. It could lead to better relations.” However, the President’s national security adviser said there would be “no point in a theatrical meeting.” It is unlikely that the Iranians will agree to the American’s demands as the regime has repeatedly circumvented previous attempts to rein in its nuclear programme.

Earlier this month, Mr Ahmadinejad said he was ready for face-to-face talks.

“We are hopefully coming for the UN assembly,” Mr Ahmadinejad said in an address to expatriate Iranians which was broadcast live on state television.

“We are ready to sit down with Mr Obama face-to-face and put the global issues on the table, man-to-man, freely, and in front of the media and see whose solutions are better. We think this is a better approach.”

In the interview, Gen Jones refused to be drawn on whether military action might be considered against Iran if it fails to comply with international demands.

“I’m not going to speculate on that,” he said.

There are currently extensive UN sanctions against the country.

New York Times: Mohamed ElBaradei, the chief of the...

One Million Iranian Women Lose Jobs Because of COVID

In the past eleven months, many Iranian breadwinners have...