Iran Focus: London, Aug. 13 – Alexander G. Higgins, who covered the U.S. Embassy siege in Tehran as The Associated Press’ last bureau chief in Iran and served as a longtime AP bureau chief in Geneva, has died, the AP reported on Thursday. 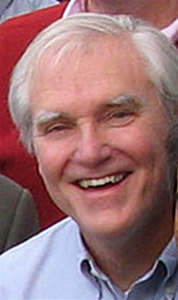 London, Aug. 13 – Alexander G. Higgins, who covered the U.S. Embassy siege in Tehran as The Associated Press’ last bureau chief in Iran and served as a longtime AP bureau chief in Geneva, has died, the AP reported on Thursday. He was 66.

In a 38-year career with the AP, Higgins reported from both sides of the Iron Curtain and covered the assassination of Egyptian President Anwar Sadat. He was expelled from Iran by Ayatollah Ruhollah Khomeini’s regime in 1980.

Much of his most recent work focused on explaining the significance of the $10 billion atom collider near Geneva and its search for the origins of the universe.

Affectionately known to all as “Sandy,” Higgins was born Oct. 25, 1943, in Cape Girardeau, Missouri, the second of five sons of an American missionary and a Red Cross worker freed from a Japanese internment camp in China in a prisoner swap during World War II. His mother gave him the nickname in honour of a Scot who also was interned in China with the couple.

Higgins joined the AP in 1972 in Boston, and worked as a newsperson in New Hampshire, Connecticut and New York. A German and French speaker, he was transferred in 1976 to the West German capital of Bonn, once a key outpost near the European front of the Cold War.

He moved to Tehran as the AP’s bureau chief in November 1979, and covered Khomeini’s calls for war against the United States, revelations about the deposed shah’s secret police and its CIA ties, and the early days of the 14-month crisis triggered by Iranian militants who seized the U.S. Embassy and held over 50 American citizens hostage.

Higgins was ordered to leave Iran in February 1980.

Higgins was the AP’s bureau chief in Cairo from 1980-1982. Then worked nine years in Washington. He was based in Saudi Arabia during the 1991 Gulf War. He then spent 19 years as the AP’s chief in Switzerland and Liechtenstein from his office at the U.N.’s European headquarters.

Higgins is survived by his wife, their children Rachel and Alexander, and his stepsons, Theo and Richard. He will be cremated in a private service. The family plans to hold a memorial service in September.

AFP: Japan called on Iran Tuesday to make a...