BBC: A golf club president from London is battling extradition to the US over claims he sold batteries for surface-to-air missiles to Iran. 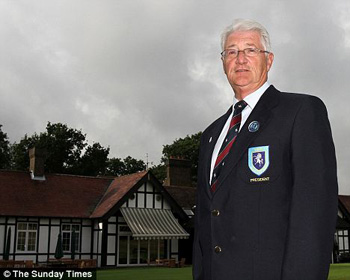 A golf club president from London is battling extradition to the US over claims he sold batteries for surface-to-air missiles to Iran.

Christopher Tappin, 63, from Orpington, on the south London/Kent border, faces 35 years in jail if convicted in an American court.

But Mr Tappin, a retired businessman and president of the Kent County Golf Union, denies the claim.

He hopes to avoid extradition at a hearing in two weeks.

Mr Tappin says he was unwittingly caught up in a US customs sting.

In light of the case Shami Chakrabarti, director of human rights group Liberty, attacked the extradition treaty between the UK and US.
‘No-one is safe’

She said: “This must remind the government to honour the promises of both coalition parties in opposition and review our rotten Extradition Act.

“If Mr Tappin really has been up to no good in Orpington, let the authorities come up with hard evidence in a British court.

“Until the act is amended, no-one who indulges in foreign holidays, business dealings or mere use of the internet is safe from being shipped off like freight on the basis of allegations from around the world.”

Mr Tappin in now being represented by Karen Todner, the solicitor who acts for computer hacker Gary McKinnon in his fight against extradition to the US. Mr McKinnon is accused of hacking US military computer systems but claims he was seeking evidence of UFOs.

Iran has been trying to buttress its air defence system because it fears US or Israeli air strikes on its nuclear facilities.