Washington Post: An American woman jailed in Iran will not be freed Saturday as anticipated, Iranian state media reported Friday, and a high-profile ceremony to mark her release appeared to have been canceled after objections from the judiciary. 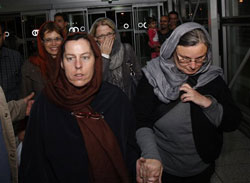 TEHRAN – An American woman jailed in Iran will not be freed Saturday as anticipated, Iranian state media reported Friday, and a high-profile ceremony to mark her release appeared to have been canceled after objections from the judiciary.

Late Friday, the Islamic Republic News Agency quoted Mohammed Hassan Salilhimaram, the deputy chief of communication for the president’s office, as saying that Sarah Shourd’s release had been “delayed.”

The reversal followed complaints by Tehran’s chief prosecutor, Abbas Jafari Dowlatabadi, who said that Shourd, 32, would not be released until investigations into her case, and those of two other Americans arrested with her, have been completed.

“The release of the American suspect . . . has been canceled,” Dowlatabadi said, according to the semiofficial Iranian Labor News Agency.

On Friday morning, a Foreign Ministry spokesman had confirmed Shourd’s release and praised President Mahmoud Ahmadinejad for “following up on her case,” the English-language state news channel Press TV reported.

Shourd and two friends – Shane Bauer and Joshua Fattal, both 28 – were arrested along the Iran-Iraq border in July 2009. Iran has accused the three of illegally crossing the border and engaging in spying. Their families say that they were hiking and that if they crossed the border, they did so unwittingly.

“Bearing in mind the principle of Islamic compassion and the special viewpoint of the Islamic Republic of Iran on the dignity of women, it was decided to release her [Sarah Shourd] on the occasion of the blessing Eid al-Fitr,” spokesperson Ramin Mehmanparast was quoted by Mehr News Agency as saying, referring to the end of Ramadan on Friday.

The government had invited dignitaries and foreign journalists to a ceremony to mark Shourd’s release. Reporters received a text message Friday afternoon, sent by the Ministry of Culture and Islamic Guidance, changing the ceremony’s location to a larger venue.

The cancellation exposes what some observers say are deepening rifts in the Iranian political establishment. In recent weeks, there have been public disputes involving the government, parliament and other powers over the budget, state subsidies and foreign policy, with influential clerics, businessmen and others lining up against Ahmadinejad.

Friday’s postponement represents an international face loss for the president’s administration as he prepares to travel to a meeting of the U.N. General Assembly on Sept. 23.