Reuters: Iranians will face economic hardship when the government slashes food and fuel subsidies, a senior cleric said on Friday, contradicting President Mahmoud Ahmadinejad’s line that his policy will be painless. 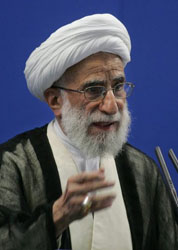 TEHRAN (Reuters) – Iranians will face economic hardship when the government slashes food and fuel subsidies, a senior cleric said on Friday, contradicting President Mahmoud Ahmadinejad’s line that his policy will be painless.

The subsidy reform that Ahmadinejad has called “the biggest economic plan in the past 50 years” aims to phase out the $100 billion the state pays every year to keep down the price of essential goods. It is due to be launched in the coming weeks.

Political analysts say the expected surge in household bills and prices for gasoline and food could reignite unrest which flared after Ahmadinejad’s disputed re-election last year.

Poorer Iranians will receive direct payments to help them cope with price rises and Ahmadinejad has said the policy will reduce rather than increase poverty, asserting that “people’s lives will improve from the very beginning.”

But the cleric leading Friday prayers in Tehran — a staunch ally of the president — said people should prepare to tighten their belts in the Islamic Republic.

“We will have a semi-abstemious period ahead of us,” Ayatollah Ahmad Jannati told worshippers. “The government should be careful to minimize the tensions and negative effects on poor people.”

The subsidy phase-out — already delayed for six months due to disagreements between Ahmadinejad and parliament — was due to start in the second half of the Iranian year, which begins on September 23. But the government has been vague on exactly when and where the cuts would be made.

A senior official said this week that gasoline subsidies would remain in place for at least another month, a delay that some analysts said could mean the government was getting cold feet.

Iran is under international sanctions that were tightened over recent months as Washington led a campaign to press Tehran into reining in a nuclear energy program seen by the West as a veiled effort to develop bombs. Iran says its nuclear ambitions are peaceful only.

Ahmadinjad has dismissed the sanctions as “pathetic” and no more effective than a “used handkerchief.” But a rival, former President Akbar Hashemi Rafsanjani, has warned the government not to play down the impact of what he said were the toughest sanctions Iran had ever faced.

The back-room deal that explains the chaos in Iraq

On the cusp of the first anniversary of the...