AP: Iran’s leader issued a decree Monday paving the way for a state takeover of the country’s largest private university, in a crushing blow to the nation’s moderates. 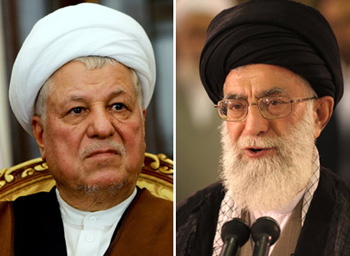 TEHRAN, Iran (AP) — Iran’s leader issued a decree Monday paving the way for a state takeover of the country’s largest private university, in a crushing blow to the nation’s moderates.

The Islamic Azad University is the center of power for former President Akbar Hashemi Rafsanjani, a pragmatist and key supporter of Iran’s moderates. The institution, which was founded in 1982, was a major site for opposition protests against the 2009 disputed re-election of President Mahmoud Ahmadinejad, which opponents say was fraudulent.

The endowment, or vaqf in Farsi, was set up in 2009, shortly after the elections by the university board to keep it independent in the face of the rising power of hardliners in the ruling system.

The university, which has more than one 1.3 million students in over 350 branches nationwide, allowed opposition candidate Mir Hossein Mousavi free access to its huge resources during his election campaign, allowing his voice to be heard all over Iran.

Ever since, Ahmadinejad and his extremist camp have intensified efforts to strip Rafsanjani of this multibillion dollar power house. The assets of the university are estimated to be around $250 billion.

The endowment was challenged by Ahmadinejad’s supporters and after the elections, the courts, parliament and various councils allied to different factions within the ruling system battled over the fate of the university.

Khamenei’s decision is a public humiliation of Rafsanjani and a huge boost to his archenemy Ahmadinejad and his extremist supporters.

In his decree, Khamenei said he had tasked two delegations comprised of legal experts and scholars headed by one of his supporters with conducting an “in depth and comprehensive” study of the issue and the final result found the endowment to be illegitimate.

“The endowment has major legal and jurisprudential problems including the legitimacy of the endowment and the competence of the university’s founders to create it,” Khamenei said, according to the state news agency.

Azad University is considered a private institution and is supposed to be immune from state interference.

But Khamenei, who has final say on all state matters, said the university would be neither private nor government-controlled, possibly meaning that it will now be under his own control.

It was not immediately clear how Rafsanjani and his moderate supporters will react to the ruling but the savvy politician said last month that annulling the endowment would be tantamount to fighting God.

“I don’t think God will let anybody to disallow this endowment. And if somebody does that, God will be stronger than him and one day will take endowment back,” he said at the time.

Rafsanjani said four legal scholars, including himself and Hasan Khomeini, grandson of the late Ayatollah Ruhollah Khomeini, the father of Iran’s 1979 Islamic Revolution, had approved the endowment.

Khamenei, who backed Ahmadinejad as the winner of the disputed 2009 election, has publicly distanced himself from Rafsanjani, saying last year, that his views were closer to that of the president.

AP: An Iranian newspaper is reporting that the ...