AFP: Iran on Tuesday blamed European Union Foreign Affairs chief Catherine Ashton for the deadlock over nuclear talks with world powers, urging her to be “more active” in pursuing the dialogue. 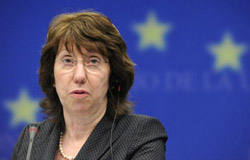 TEHRAN (AFP) — Iran on Tuesday blamed European Union Foreign Affairs chief Catherine Ashton for the deadlock over nuclear talks with world powers, urging her to be “more active” in pursuing the dialogue.

Dialogue between Iran and the six powers has been stalled since October 2009, when the two groups last met in Geneva.

The negotiations aim to address international suspicions that Iran is seeking to develop atomic weapons under the guise of a civilian nuclear programme, a charge Tehran vehemently denies.

On Saturday, Iranian Foreign Minister Manouchehr Mottaki said Tehran considered late October or early November as an appropriate time for a resumption of the talks but a spokesman for Ashton said no date had been set.

“Mrs. Ashton is still ready to talk to Iran and is hopeful that this will be possible,” spokesman Darren Ennis told AFP in response to Mottaki’s remarks.

“If she is really eager for negotiations, she should be more active,” he insisted, adding that her predecessor Javier Solana was “more active.”

“We have announced our readiness for negotiations. But the other side … is not really following up, or is not serious” about resuming the dialogue, he said.

Iranian President Mahmoud Ahmadinejad had declared a unilateral ban on talks until the middle of September after the Islamic republic was hit with new sanctions by UN Security Council on June 9.

Iranian officials have regularly insisted that during any talks Tehran will reiterate that its nuclear rights be recognised.

Reuters: If this week's Arab summit didn't quite result...

U.S. makes it easier to sell medical supplies to Iran

Reuters: The United States on Thursday expanded the list...