New York Times: One evening last August, as President Hamid Karzai wrapped up an official visit to Iran, his personal plane sat on the airport tarmac, waiting for a late-running passenger: Iran’s ambassador to Afghanistan. 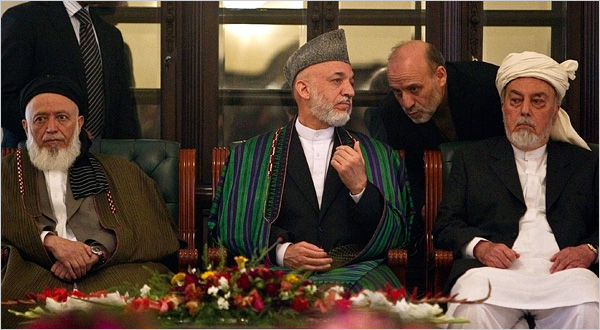 KABUL, Afghanistan — One evening last August, as President Hamid Karzai wrapped up an official visit to Iran, his personal plane sat on the airport tarmac, waiting for a late-running passenger: Iran’s ambassador to Afghanistan.

The ambassador, Feda Hussein Maliki, finally appeared, taking a seat next to Umar Daudzai, Mr. Karzai’s chief of staff and his most trusted confidant. According to an Afghan official on the plane, Mr. Maliki handed Mr. Daudzai a large plastic bag bulging with packets of euro bills. A second Afghan official confirmed that Mr. Daudzai carried home a large bag of cash.

“This is the Iranian money,” said an Afghan official, who spoke on condition of anonymity. “Many of us noticed this.”

The bag of money is part of a secret, steady stream of Iranian cash intended to buy the loyalty of Mr. Daudzai and promote Iran’s interests in the presidential palace, according to Afghan and Western officials here. Iran uses its influence to help drive a wedge between the Afghans and their American and NATO benefactors, they say.

The payments, which officials say total millions of dollars, form an off-the-books fund that Mr. Daudzai and Mr. Karzai have used to pay Afghan lawmakers, tribal elders and even Taliban commanders to secure their loyalty, the officials said.

“It’s a basically a presidential slush fund,” a Western official in Kabul said of the Iranian-supplied money. “Daudzai’s mission is to advance Iranian interests.”

The Western and Afghan officials interviewed for this article spoke on the condition of anonymity, citing the delicacy of discussing the financial dealings of Mr. Karzai and his aide. The sources said they were motivated by a concern that Mr. Daudzai was helping to poison relations between Mr. Karzai and the United States. Mr. Daudzai and Mr. Karzai both declined to respond to written questions about their relationship with Iran. An aide to Mr. Daudzai dismissed the allegations as “rubbish.”

Mr. Maliki, the Iranian ambassador in Kabul, also declined to answer questions. A spokesman for Mr. Maliki called the allegations “devilish gossip by the West and foreign media.”

The Iranian payments are intended to secure the allegiance of Mr. Daudzai, a former ambassador to Iran who consistently advocates an anti-Western line to Mr. Karzai, the officials said. Mr. Daudzai briefs Mr. Karzai each morning.

“Karzai knows that without the U.S., he is finished,” an associate of the president said. “But it’s like voodoo. Daudzai is the source of all the problems with the U.S. He is systematically feeding him misinformation, disinformation and wrong information.”

The payments to Mr. Daudzai illustrate the degree to which the Iranian government has penetrated Mr. Karzai’s inner circle despite his presumed alliance with the United States and the other NATO countries, which have sustained him with military forces and billions of dollars since the Taliban’s ouster since 2001.

Earlier this year, Mr. Karzai invited the Iranian president, Mahmoud Ahmadinejad, to the presidential palace, where Mr. Ahmadinejad gave a virulently anti-American speech. When Mr. Ahmadinejad visited Kabul, he brought two boxes of cash with him, an Afghan official said. “One box was for Daudzai personally, the other for the palace,” the official said.

A senior NATO officer, speaking on condition of anonymity, declined to discuss whether Mr. Daudzai was receiving money from Iran. But he said that the Iranian government was conducting an aggressive campaign inside Afghanistan to undermine the American and NATO mission and to gain influence in politics.

The NATO officer said Iran’s intelligence agencies were playing both sides of the conflict, providing financing, weapons and training to the Taliban. Iranian agents also financed the political campaigns of several Afghans who ran in last month’s parliamentary election, the NATO officer said.

The Iranian intelligence services have developed the ability to assassinate opponents and attack American troops inside the country, the NATO officer said.

“I am very concerned that they have a lethal capability and presence inside Afghanistan and Kabul,” the officer said.

Mr. Holbrooke did not respond to requests for comment. In an interview, Mr. Zakhilwal declined to talk about the discussion with Mr. Holbrooke or about any Iranian activities in Afghanistan.

“We have no choice but to be friendly with Iran,” Mr. Zakhilwal said. “It’s a hostile neighborhood.”

Mr. Daudzai is part of a group of Afghans around Mr. Karzai whose members once belonged to Hezb-i-Islami, a hard-line Islamist group that fought the Soviet Union in the 1980s. The guerrilla group, loosely allied with the Taliban, is still fighting NATO forces and the Afghan government.

Hezb-i-Islami’s leader, Gulbuddin Hekmatyar, was one of the most brutal of Afghan warlords. During the civil war in the 1990s, his forces conducted an extended bombardment of Kabul, killing thousands of civilians. Since 2001, Mr. Hekmatyar has spent at least part of the time living under the protection of the Iranian government. The group also has long-standing ties to Pakistan’s intelligence services, which maintain links to the Taliban.

Mr. Daudzai returned to Kabul in 2007 to resume his job as chief of staff. Since then, officials said, Mr. Daudzai has maintained a close relationship with the Iranian ambassador. Iranian officials have nearly unfettered access to Mr. Karzai’s palace, bypassing the normal rules of protocol.

“The relationship is intimate,” an Afghan political leader said of Mr. Daudzai and the Iranians.

Accounts vary as to how much Iranian money flow into the presidential palace. An Afghan political leader said he believed that Mr. Daudzai received between $1 million and $2 million every other month. A former diplomat who served in Afghanistan said sometimes single payments totaled as much as $6 million.

One former Afghan official said the money appeared to be kept in a safe in Mr. Daudzai’s office.

It is not clear whether Mr. Daudzai takes any of the money himself or whether he is the only conduit. But Afghan and Western officials say Mr. Daudzai owns at least six homes in Dubai, in the United Arab Emirates, and in Vancouver, British Columbia, acquired during his time as Mr. Karzai’s top aide.

One Afghan official said Mr. Daudzai used his power over Mr. Karzai’s schedule to ensure that Afghans who saw him registered complaints about the American presence in the country and the deaths of Afghan civilians in the war. “This is the strategy,” the Afghan official said.

Mr. Daudzai’s efforts on Iran’s behalf have met with some resistance. According to the Western official, Mr. Daudzai ran afoul of Afghan intelligence officials when he tried to help some Iranian businesses set up operations in Kabul. The Afghan intelligence officials believed that the Iranian officials were fronts for the Islamic Revolutionary Guards Corps, a powerful wing of the Iranian military.

The Iranian businesses were shut down by the National Directorate of Security, the Western official said. But not for long.

“Daudzai helped them get going, then N.D.S. closed them down, but then they reopened again,” the Western official said. An Afghan official confirmed the account.

Iranians get involved in other parts of Afghanistan’s political life as well. The Iranian ambassador is trying to sway the choice of speaker of the lower house of Parliament, Afghans said. According to an Afghan official, Mr. Maliki recently called Mirwais Yasini, a candidate for the speaker’s job, and urged him to step aside in favor of Yunus Qanooni.

Israel can only rely on self against Iran threat: PM