AP: Authorities put down 14 lions at the Tehran zoo that had been diagnosed with an infectious bacterial disease that could affect visitors, a local newspaper reported on Monday. 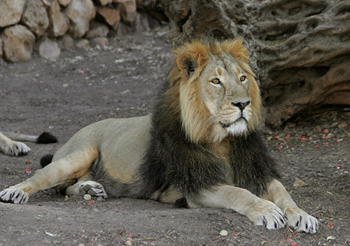 TEHRAN, Iran (AP) – Authorities put down 14 lions at the Tehran zoo that had been diagnosed with an infectious bacterial disease that could affect visitors, a local newspaper reported on Monday.

The state-own Jam-e Jam daily reported that the lions were suffering from glanders, a bacterial disease found in horses, donkeys, mules as well as other domesticated animals. It can spread from infected animals to humans. The paper did not say when the lions killed.

Houman Moloukpour, a veterinarian, told the newspapers that the lions most likely contracted the disease because of mismanagement at the zoo.

Moloukpour said over the past two month three lions have died in the zoo after they contracted by glanders, which he said cannot be treated among domesticated animals but wild ones do respond to treatment.

The semiofficial Fars news agency reported that the disease could also be spread through the city by stray cats.

“The feral cats, which frequently go to the zoo, can transfer the disease to the rest of the city easily,” veterinarian Ami Peiman Khosravi of the Tehran Veterinary Center told the agency.

The zoo is located in western part of Tehran near densely populated neighborhoods and the main football stadium.

The death of the lions came some two weeks after a Siberian tiger died in the zoo.

Mohammad Javad Mohammadizadeh, head of Iran’s environmental department, told Fars Sunday that the tiger died after being fed by contaminated meat, though it is possible it could also be related to the glanders.

The tiger was in the zoo as a part of an exchange program between Iran and Russia under which Iran gave two leopards to Russia in return for the tigers.

The other tiger is still in the zoo, under quarantine.

The disease can lead to death in the affected animal or human in a matter of days or weeks, but the bacteria itself is easily destroyed by sunlight, heat and ordinary detergents.

Glanders is rare in the Western world, but is still endemic in parts of Africa, Asia, the Middle East and South America.