Reuters: Iran has banned the production of Valentine’s Day gifts and any promotion of the day celebrating romantic love to combat what it sees as a spread of Western culture, Iranian media reported. 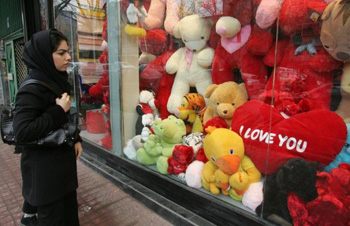 TEHRAN (Reuters) – Iran has banned the production of Valentine’s Day gifts and any promotion of the day celebrating romantic love to combat what it sees as a spread of Western culture, Iranian media reported.

The February 14 celebration named after a Christian saint is not officially banned but hardliners have repeatedly warned about the corruptive spread of Western values. Under Iran’s Islamic law, unmarried couples are not allowed to mingle.

The printing works owners’ union issued an instruction on the ban, imposed by Iranian authorities, covering gifts such as cards, boxes with the symbols of hearts and red roses.

Valentine’s Day has become increasingly popular among the Iranian youth and is a money-maker for businesses in a country where 70 percent of people are under 30 and have no memory of the 1979 Islamic revolution which toppled the U.S.-backed Shah.

“Printing and producing any products related to Valentine’s Day, including posters, brochures, advertising cards, boxes with the symbols of hearts, half-hearts, red roses and any activities promoting this day are banned,” read the instruction. “Authorities will take legal action against those who ignore the ban.”

Some nationalists have suggested replacing Valentine’s Day with “Mehregan,” an Iranian festival celebrated since the pre-Islamic era. Mehr means friendship, affection or love.

The positions of Iranian officials on the 2015 nuclear...