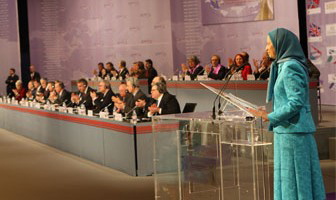 The call for the lifting of the ban on the People’s Mojahedin Organisation of Iran (PMOI/MEK) was made at a convention centre in central Berlin.

Several thousand Iranians cheered Maryam Rajavi, head of the coalition National Council of Resistance of Iran, who also addressed the conference. The PMOI is the main group within the NCRI coalition.

“What I know, what I have read, and what I have been able to discern tells me that the MEK does not deserve to be titled a terrorist organisation”, said General Peter Pace, Chairman of the US Joint Chiefs of Staff during the Bush administration.

In his remarks, former US Attorney General Michael Mukasey stressed that the blacklisting of the PMOI by the US State Department was “hypocritical”.

Gen. Hugh Shelton, Chairman of the Joint Chiefs of Staff during the Clinton administration, said: “By having the MEK on the foreign terrorist organisations list we in the United States have weakened the support of the best-organised internal resistance movement to counter a terrorist-orientated, anti-Western and anti-democratic regime in the region”.

Rajavi told the audience the only leverage the world had to achieve an end to Iran’s domestic repression and international terrorism was the “third option” of “democratic change by Iranian people and their organised resistance”.

She urged the US to revoke the PMOI’s blacklisting and formally recognise the “resistance of the Iranian people”.

Howard Dean, former Chair of the Democratic National Committee and former Presidential candidate, noted: “Madam Rajavi does not sound like a terrorist to me. She sounds like a President, and her organisation should not be listed as a terrorist organisation. We should be recognising her as the President of Iran”.

Sid Ahmed Ghozali, former Prime Minister of Algeria, urged the international community to act to prevent Iran from usurping the “positive changes” in the region.

Other panellists that spoke in favour of the PMOI were Patrick Kennedy, former Congressman and son of late Senator Edward Kennedy; Louis J. Freeh, Director of the Federal Bureau of Investigation (1993-2001); Mitchell B. Reiss, Director of Policy Planning at the State Department (2003-2005); Günter Verheugen, European Commissioner (1999-2009); and Leo Dautzenberg, a former Member of the German Bundestag.

The US State Department designated the PMOI as a foreign terrorist organisation in 1997 in what officials then acknowledged was a goodwill gesture to Tehran. A federal Court of Appeals in Washington DC in July 2010 ruled in favour of the PMOI, ordering the Secretary of State to review the designation. Britain and the European Union lifted their ban on the group in 2008 and 2009 respectively after rulings by their courts.

Japan’s May Iran crude imports slide ahead of sanctions