Reuters: The United States said on Tuesday it had imposed sanctions on Belarusneft, a state-owned Belarussian energy company, for its involvement in the Iranian petroleum sector. 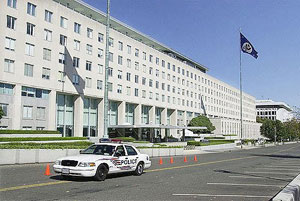 WASHINGTON, March 29 (Reuters) – The United States said on Tuesday it had imposed sanctions on Belarusneft, a state-owned Belarussian energy company, for its involvement in the Iranian petroleum sector.

The United States suspects Iran of seeking to develop nuclear weapons under cover of its civil atomic program. Iran denies this, saying its nuclear program is solely to produce energy so that it can export more of its valuable oil and gas.

Major powers have tightened sanctions on Iran via the U.N. Security Council and unilateral steps to try to pressure Tehran to meet U.N. demands that it halt sensitive nuclear work and provide more information about its atomic program.

The U.S. State Department said Belarusneft had entered into a $500 million contract with NaftIran Intertrade company in 2007 for the development of Iran’s Jofeir oilfield.

The Iran Sanctions Act requires sanctions be imposed on firms that make certain investments over $20 million in Iran.

The spokesman said he was not aware of Belarusneft having any such loans or any intent of getting into the U.S. market but he said the sanctions would prevent it from doing so in the future and deter other companies from Iranian investments.

“They limit the company’s ability to access the U.S. market and, even if they don’t have any U.S. commercial activities at present, they will limit their options to operate in the U.S. in the future,” Toner told reporters at his daily briefing. (Editing by Eric Beech)

Reuters: Iran is "in the process" of completing measures...