Reuters: Three U.S. citizens and their two companies were indicted on Thursday for illegally exporting millions of dollars worth of computers to Iran via the United Arab Emirates, the Justice Department said. 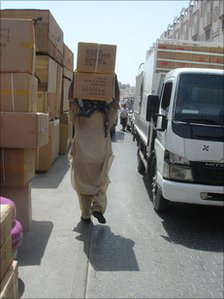 WASHINGTON (Reuters) – Three U.S. citizens and their two companies were indicted on Thursday for illegally exporting millions of dollars worth of computers to Iran via the United Arab Emirates, the Justice Department said.

It said Jeng Shih, 53, and his New York company, Sunrise Technologies and Trading Company, were charged with 27 counts over exports of the equipment without obtaining the required Treasury Department licenses.

As part of the investigation, U.S. government agents identified a company in Dubai that had purchased computers worth millions of dollars from U.S. companies for export to Iran, through Dubai, Justice Department officials said.

They said one of the Dubai company’s employees, who was not identified, pleaded guilty in U.S. court and began cooperating in the investigation.

The employee said laptops worth millions of dollars had been purchased from Shih for shipment to Iran, averaging $700,000 worth of computers each month, the officials said.

Federal agents also obtained documents that more than 1,000 computers had been shipped by Shih’s company to Dubai and later to Iran just in April and May last year.

In February, the employee met with Shih in New York and recorded conversations in which Shih allegedly said how he used fake invoices on shipments to Iran, the officials said.

They said the Dubai company also bought laptops worth millions of dollars from the California firm for shipment to Iran.

The employee said Habibion and Motamedian sold about $300,000 worth of computers to the Dubai company each month and knew that the computers were going to Iran.

At a January 5 meeting, Habibion allegedly told the employee to lie to federal agents about doing business in Iran, urging him to say, “I go there to visit my family, but I have no business there,” according to court documents.