Tony Blair calls for regime change in Iran and Syria 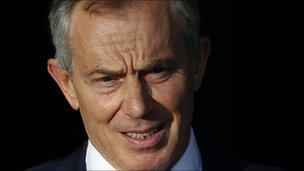 Tony Blair calls for regime change in Iran and Syria as he blames Tehran for prolonging the conflict in Iraq after the 2003 invasion.

In an interview to mark the 10th anniversary of the 9/11 attacks, the former prime minister warns that the Middle East would be “very, very badly” destabilised if Iran acquired nuclear weapons.

Blair, who is the Middle East peace envoy, tells the Times: “Regime change in Tehran would immediately make me significantly more optimistic about the whole of the region. If Iran were to acquire nuclear weapons capability it would destabilise the region very, very badly.

“They continue to support groups that are engaged with terrorism and the forces of reaction. In Iraq one of the main problems has been the continued intervention of Iran and likewise in Afghanistan.”

The former prime minister appears to be open to the idea of a military attack against Iran if it comes close to acquiring nuclear missiles. But he makes clear he was not advocating a military strike.

He does not suggest that Syria presents the same threat as Iran. But he says that Syria would be better off if President Bashar al-Assad, the president, stands down. Blair says: “He is not going to lead the programme of change in Syria now. He has shown he is not capable of reform. His position is untenable. There is no process of change that leaves him intact.”

Assad humiliated Blair when the former prime minister took the rare step of visiting Damascus after the 9/11 attacks to build up support for a coalition against al-Qaida and the Taliban. At a press conference with Blair, the Syrian president likened Palestinian terrorists to the Free French forces in the second world war.

Blair warns that the world still faces a lengthy battle to defeat groups that have distorted Islam. “We are a long way from getting out of this,” he says. The former prime minister adds: “The threat is still from the same ideology and the same narrative which is based on a perverted view of religion and which regards cultures and faiths as in fundamental conflict with each other.”

Blair says Britain and the US had initially failed to understand the popularity of the theory that the west is intent on conflict. “I think the thing that we came to learn later is that even though the number of actual extremists was very small, the number of people who bought a certain amount of the narrative that gave rise to that extremism was worryingly large. And, the real reason why it was difficult in Afghanistan and then in Iraq – and is difficult actually all over the region of the Middle East at the moment, is that the narrative in which religion is mixed up with politics and in which the idea that ‘the West is inherently in conflict with us’ – that ideology, that has those ideas in it, in a very toxic way, is far more widespread than we understood at the time.

“And so what that means is that you can knock out – militarily – the regime, but then when you’re engaged in the process of nation building afterwards it’s not like nation building was in say the Balkans or eastern Europe. You know, you’re nation building in circumstances where there are groups of people prepared to use terrorism and in particular suicide bombing to destroy your attempt to build a country.”

Blair added that the anti-west ideology made it difficult to rebuild nations after conflicts. “So you may have the best intentions in the world in building it but they’re actually viscerally opposed to the type of nation you’re trying to build, which is an open and a democratic nation. And that’s, I think that ideology is still very much with us.”

AFP: Russia said Wednesday that US Secretary of State...