Reuters: The European Union condemned an attack on the British embassy in Tehran on Tuesday and called on Iran to protect diplomats on its territory. 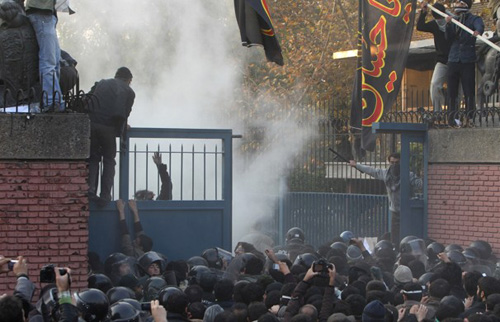 BRUSSELS Nov 29 (Reuters) – The European Union condemned an attack on the British embassy in Tehran on Tuesday and called on Iran to protect diplomats on its territory.

“It is with extreme concern that we have learnt that the premises of the Embassy of the United Kingdom in Tehran have been overrun by demonstrators,” Maja Kocijancic said.

“We strongly condemn this totally unacceptable incursion and call on the government of the Islamic Republic of Iran immediately to fulfil its international obligations… to protect diplomats and embassies.”

Reuters: Seven Iranian policemen were killed in an overnight...

Iran has until July 12 to stop enrichment