AFP: Iran’s boast it downed a highly sophisticated US drone has handed the Islamic republic a propaganda coup while revealing numerous inconsistencies in both Iranian and US accounts of the incident. 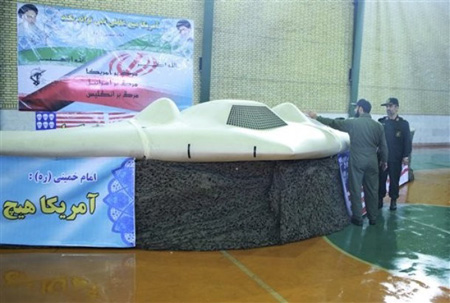 TEHRAN (AFP) — Iran’s boast it downed a highly sophisticated US drone has handed the Islamic republic a propaganda coup while revealing numerous inconsistencies in both Iranian and US accounts of the incident.

Leading Iranian newspapers on Saturday gave front-page prominence to the story, displaying photos of what was said to be the remarkably intact RQ-170 Sentinel drone in Iran’s possession.

One daily, Vatanemrooz, bragged that “Satan’s eye has been gouged out,” repeating the characterisation of the United States as the “Great Satan.”

The ebullient media coverage, which began on Thursday with state television images of the alleged drone, eclipsed other reports, including on the threat of more sanctions on Iran and the fallout from last month’s storming of the British embassy in Tehran.

The deputy chief of Iran’s armed forces, Brigadier General Masoud Jazayeri, was quoted by the official IRNA news agency as warning that “the US government will have to pay a high price for its unacceptable actions.”

He added: “Our defensive actions will not be limited to our geographical borders.”

Iran has sent a letter of protest to the United Nations, saying the drone’s flight was part of months of “covert actions by the American government” against it.

It also summoned the Swiss ambassador, who handles US interests in Iran in the absence of US-Iran diplomatic relations, and the Afghan ambassador to lodge formal protests and demand explanations.

A letter given to the Afghan ambassador said that Iran’s airspace had been violated from his country and stressed “Afghanistan’s responsibilities as a good neighbour,” IRNA reported.

Information given by Iranian and US officials in their respective countries’ media since Tehran announced December 4 it had captured the drone has raised several inconsistencies over the affair.

The Iranian military’s joint chiefs of staff initially said its air defences managed to “shoot down” the drone as it “briefly violated” Iran’s eastern airspace.

Yet Mohammad Khazaee, Iran’s ambassador to the United Nations, said in his letter of protest that the drone flew “deep inside” Iran, close to the eastern desert town of Tabas, according to Iranian media.

“After reaching the northern part of Tabas area — 250 kilometres (150 miles) deep inside Iranian territory — the aircraft was confronted by the timely response of the Islamic republic’s armed forces,” his letter read.

And Iranian military officials were now saying the drone — displaying little damage in state media images — had not been shot down as first asserted, but rather had its controls hacked by a Revolutionary Guards cyber warfare unit.

US officials have also added to some of the mystery surrounding the incident.

Although none has spoken on the record, several told US media anonymously the drone had been on a CIA mission over Iran — and not on a US military flight over western Afghanistan, as the NATO-led International Security Assistance Force initially tried to suggest.

The officials were sceptical of Iran’s claims that it had broken through encryption technology to seize control of the aircraft, hypothesising that the drone suffered a malfunction.

But none was able to explain how the drone — programmed to either automatically return to its base in Afghanistan or possibly even self-destruct — was recovered by the Iranians.

AFP: Iran's reformist government admitted Monday that it was...

Former French PM wants Paris to be tough on Tehran