Obama has ‘failed’ on Iran: Romney 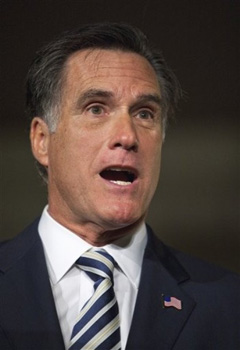 “I want to make sure that the people of this nation understand that he failed us not only here at home, he’s failed us in dealing with the greatest threat we face, which comes from Iran,” Romney said at a campaign stop at a diner here.

“This is a failed presidency,” the former Massachusetts governor and millionaire venture capitalist declared two days before Iowans cast the first votes of the Republican presidential nominating contest.

His comments came one day after Obama signed a law targeting Iran’s central bank and financial sector with punishing new sanctions, sending the country’s currency, the rial, to a record low.

On Sunday, Iran defiantly announced that it had tested a new anti-radar medium-range missile and made an advance in its nuclear program.

The West alleges Tehran is seeking to acquire a weapons capability under the guise of its nuclear research program. Iran denies any such ambition and says its work is only for civil energy and medical purposes.

The moves raised the stakes in a simmering confrontation between the longtime foes, amid fears that Iran could make good on threats to close the world’s most important oil route, the Strait of Hormuz, in response to new pressure.

Iran Focus: The head of the public relations office...

Injustice in Washington is a threat to justice everywhere

UPI: Outlandish is probably the polite way to describe...