AFP: Iran’s nuclear ambitions could trigger “a new Cold War” more perilous than that between the West and the Soviet Union, the British Foreign Secretary warned on Friday. 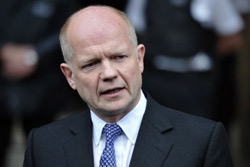 LONDON (AFP)— Iran’s nuclear ambitions could trigger “a new Cold War” more perilous than that between the West and the Soviet Union, the British Foreign Secretary warned on Friday.

William Hague said Iran obtaining a nuclear bomb would spark an atomic arms race between rival Middle Eastern nations that could be more dangerous than the original Cold War because the old “safety mechanisms” are missing.

“If (the Iranians) obtain nuclear weapons capability, then I think other nations across the Middle East will want to develop nuclear weapons,” he told Britain’s Daily Telegraph newspaper.

“The most serious round of nuclear proliferation since nuclear weapons were invented would have begun with all the destabilising effects in the Middle East,” he continued.

“And the threat of a new Cold War in the Middle East without necessarily all the safety mechanisms… would be a disaster in world affairs.”

Iran faces four sets of UN sanctions and a raft of unilateral US and EU sanctions designed to halt a programme the West fears conceals a drive for nuclear weapons.

Tehran denies this charge, saying its nuclear project is for purely peaceful purposes.

In response to feverish speculation in recent weeks that Israel is preparing to mount a pre-emptive strike on Iran’s nuclear programme, Hague said Iran being “attacked militarily” would have “enormous downsides”.

“We are very clear to all concerned that we are not advocating military action,” he told the Telegraph.

“We support a twin-track strategy of sanctions and pressure and negotiations on the other hand.”

“We are not favouring the idea of anybody attacking Iran at the moment,” he added.”

In a February 14 letter to Ashton, Iran’s chief nuclear negotiator Saeed Jalili said Tehran is ready to resume talks at the “earliest” opportunity as long as the six powers respect its right to peaceful atomic energy.

By Mehdi The United States warned Iran to keep...