AFP: The United States Sunday welcomed Turkey’s decision to reduce its purchases of oil from neighbouring Iran by 20 percent. 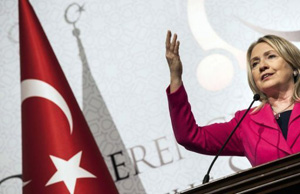 ISTANBUL (AFP)— The United States Sunday welcomed Turkey’s decision to reduce its purchases of oil from neighbouring Iran by 20 percent.

“I was encouraged to hear Turkey’s announcement that it will significantly reduce crude oil imports from Iran,” US Secretary of State Hillary Clinton told a press conference in Istanbul where she attended a “Friends of Syria” conference.

“We certainly welcome that announcement,” she added.

Turkey’s national oil company Tupras Friday said it had cut its purchases of oil from Iran by 20 percent as western nations tighten sanctions against Tehran over its nuclear programme.

“Given the situation, it was decided following an evaluation to reduce by 20 percent crude purchases from Iran,” the company said in a statement.

Turkey, which has been importing a third of its oil from Iran, is seeking to obtain an exemption from new US sanctions against Iran.

Under a new law aimed at pressing Iran over its controversial nuclear programme, the United States will penalise foreign financial institutions over transactions with Iran’s central bank, which handles sales of oil.

Earlier this month Washington granted financial institutions from Japan and 10 EU nations exemptions, praising the countries for reducing dependency on oil from the Islamic republic.

Turkish officials said they would seek a similar exemption.

Iran says that its nuclear programme is meant for peaceful purposes, but a number of Western nations fear it is trying to build a nuclear bomb.

Turkish Energy Minister Taner Yildaz said the country would try to make up for lower imports from Iran by buying more crude from Libya.

Ahmadinejad: Iran will not back down an iota on nukes