AFP: Syrian rebels posted Sunday an online video of Iranians kidnapped in Damascus, charging they were elite Revolutionary Guards, and warning Tehran of further abductions over its support for Damascus. 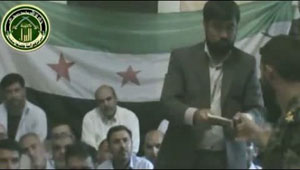 DUBAI (AFP)— Syrian rebels posted Sunday an online video of Iranians kidnapped in Damascus, charging they were elite Revolutionary Guards, and warning Tehran of further abductions over its support for Damascus.

Fighters of the Al-Baraa Brigade of the rebel Free Syrian Army have “captured 48 of the shabiha (militiamen) of Iran who were on a reconnaissance mission in Damascus,” said a man dressed in FSA officer’s uniform in the video posted on YouTube.

“During the investigation, we found that some of them were officers in the Revolutionary Guards,” he said, showing documents taken from one of the men, who appeared in the background.

One of the documents was claimed to be a licence to carry arms.

In the footage, a group of men appeared sitting on the floor, while gunmen behind them carried the old Syrian flag that has been adopted by the rebels.

“We warn Iran that we will target all its installations in Syria… The fate of all Iranians working in Syria will be just like the fate of those, either prisoners, or dead,” the bearded officer said.

“God is great,” the gunmen chanted as he finished reading his statement.

“They are 48, in addition to an Afghani interpreter,” said the officer, who is the FSA chief in the east Damascus suburb of Ghouta, claiming that the captives were members of a 150-strong group sent by Iran for “reconnaissance on the ground.”

Iran has appealed to governments with close relations with the Syrian opposition for help in securing the release of the 48 hostages it says were pilgrims visiting the Sayyida Zeinab shrine, a Shiite pilgrimage site in the southeastern suburbs of Damascus.

Shmeir said his men “have not yet entered into any contacts” about the hostages.

Tehran has repeatedly denied it has sent any military units to Syria.

Iranian Defence Minister Ahmad Vahidi said on Saturday before the latest abduction was made public that “Iran has no armed forces in Syria and the Syrian government has not made such a request,” according to Iranian state television channel IRIB.

“Syria has a powerful military and also enjoys popular support. The Syrians can handle the adventures that foreigners have created in their country,” Vahidi said.

Press Association: The United Nations is holding talks on...