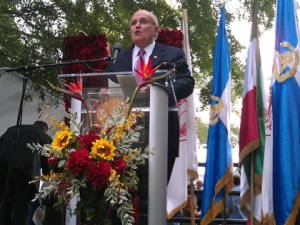 Speaking to the crowd at Dag Hammarskjold Plaza Wednesday, Giuliani sounded like he was on the campaign trail and told the anti-Iranian protesters that the U.S. needs another president like Republican Ronald Reagan, 1010 WINS’ Carol D’Auria reported.

“Where is that American President like Ronald Reagan? America and the world needs that now,” a fired-up Giuliani told the crowd. “Where is our American president who will stand up and point at Iran and say, ‘Tear down this theocracy. Tear down the murdering mullahs.’”

Throughout the plaza, protesters wore yellow vests with photos of people they say were massacred by the Iranian regime as its leader, Mahmoud Ahmadinejad, gave his final speech to the U.N. General Assembly as president.

The rally was sponsored by groups including the Association of Iranian-Americans in New York & New Jersey.

Inside the U.N., Ahmadinejad said he has a vision of a new world order that would be absent the “hegemony of arrogance.”

Ahmadinejad, known for fiery denunciations of the United States and Israel, cited what he termed the “continued threat by the uncivilized Zionists to resort to military action against our great nation is a clear example of this bitter reality.”

A spokesperson said the U.S. delegation decided not to attend Ahmadinejad’s speech.

“Over the past couple of days, we’ve seen Mr. Ahmadinejad once again use his trip to the UN not to address the legitimate aspirations of the Iranian people but to instead spout paranoid theories and repulsive slurs against Israel,” Erin Pelton, spokeswoman for the U.S. Mission to the U.N. said in a statement. “It’s particularly unfortunate that Mr. Ahmadinejad will have the platform of the U.N. General Assembly on Yom Kippur, which is why the United States has decided not to attend.”

In his speech Wednesday, Ahmadinejad did not reference Iran’s nuclear program. The United States, Israel and Western nations claim Tehran is using what it insists is a peaceful nuclear program as cover for building a weapon.

Israel has threatened a military strike against Iranian nuclear installation. President Barack Obama insists time remains to solve the dispute through diplomacy, but in his speech at the U.N. on Tuesday, Obama said the U.S. would not tolerate an Iran with atomic weapons.

“Make no mistake. A nuclear-armed Iran is not a challenge that can be contained,” Obama said. “It would threaten the elimination of Israel, the security of Gulf nations and the stability of the global economy.”

But Ahmadinejad insists the program is intended to create electrical power, not weapons.

“Because of our beliefs, we do not, we do not believe in a nuclear weapon. We are against it,” he told “CBS This Morning.”

Earlier this week, public officials, lawmakers and religious leaders to came together to denounce Ahmadinejad’s nuclear build up, human rights violations and position against Israel.

Ahmadinejad said this would be his last trip to New York as the president of Iran because his term is ending and he is barred from seeking a third consecutive term.

But he did not rule out staying active in Iranian politics and said he might return as part of future Iranian delegations to New York.

AP: An Iranian dissident who went missing for almost...