Reuters: Riot police clashed with demonstrators and arrested money changers in Tehran on Wednesday in disturbances over the collapse of the Iranian currency, which has lost 40 percent of its value against the dollar in a week, witnesses said. By Yeganeh Torbati and Marcus George 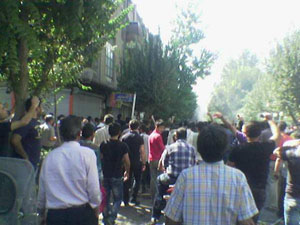 DUBAI (Reuters) – Riot police clashed with demonstrators and arrested money changers in Tehran on Wednesday in disturbances over the collapse of the Iranian currency, which has lost 40 percent of its value against the dollar in a week, witnesses said.

Police fired tear gas to disperse the demonstrators, angered by the plunge in the value of the rial. Protesters denounced President Mahmoud Ahmadinejad as a “traitor” whose policies had fuelled the crisis.

In a clampdown on the unofficial foreign currency market, a number of traders selling dollars were arrested after authorities ordered security forces to take action against those they see as speculators.

The rial has hit record lows against the U.S. dollar almost daily as Western economic sanctions imposed over Iran’s disputed nuclear program have cut its export earnings from oil, undermining the central bank’s ability to support the currency.

Panicking Iranians have scrambled to buy hard currency, pushing down the rial whose increasing weakness is hurting living standards and threatening jobs.

“Everyone wants to buy dollars and it’s clear there’s a bit of a bank run,” said a Western diplomat based in Tehran. “Ahmadinejad’s announcement of using police against exchangers and speculators didn’t help at all. Now people are even more worried.”

The protests are seen as posing a threat to Ahmadinejad rather than the government, which is expected to put a stop to the foreign exchange black market, pump in funds to stabilize the currency and prevent the protests from spreading.

Tehran’s main bazaar, whose merchants played a major role in Iran’s revolution in 1979, was closed on Wednesday. A shopkeeper who sells household goods told Reuters that currency chaos was preventing merchants from quoting accurate prices.

A computer dealer said he had halted sales because of the volatility in the currency market. “The same product can change price within an hour,” he said by telephone.

The protests began around the bazaar and spread, according to the opposition website Kaleme, to Imam Khomeini Square and Ferdowsi Avenue – scene of bloody protests against Ahmadinejad’s re-election in 2009.

Protesters shouted “Mahmoud the traitor – you’ve ruined the country” and “Don’t fear, don’t fear – we are all together,” the website said.

The semi-official Mehr news agency said the largest gatherings were around the currency-trading centers of Ferdowsi Avenue, the Istanbul intersection, and Imam Khomeini Square and that security forces had been deployed to disperse the protests.

Iranian authorities currently do not allow Reuters to report from inside the country.

The national currency dived to a record low on Tuesday of 37,500 to the dollar in the free market from about 34,200 at the close of business on Monday, foreign exchange traders in Tehran said. On Monday last week, it traded at around 24,600.

On Tuesday Ahmadinejad blamed the crisis on the U.S.-led economic sanctions against Iran and insisted the country could ride out the crisis. He said security forces should act against 22 “ringleaders” in the currency market.

In Washington, U.S. Secretary of State Hillary Clinton held out the possibility on Wednesday that the sanctions could be eased quickly if Tehran worked with major powers to address questions about its nuclear program.

Asked about the protests, Clinton told reporters that Iranian government decisions had had an impact on the country’s economy and called on Tehran to cooperate with the P5+1 – the five permanent members of the U.N. Security Council and Germany.

“Of course the sanctions have had an impact as well, but those could be remedied in short order if the Iranian government were willing to work with the P5+1 and the rest of the international community in a sincere manner,” she said.

Iranian Supreme Leader Ayatollah Ali Khamenei struck a defiant note on Wednesday. “The Iranian nation has never submitted to pressures and never will, and this is why the enemy is angry,” he said in a speech.

Mehrdad Emadi, an Iranian-born economic adviser to the European Union, said the slide in the rial had prompted many Iranians to try to limit their losses by buying dollars.

“The rush out of the rial shows that everyone wants to sell. But clearly it is going to make the life of ordinary Iranians very painful and difficult,” he said.

The rial’s slide suggested the Western sanctions were having a serious impact. Many businessmen and ordinary citizens say the government is at least partly to blame for the currency crisis, and Ahmadinejad has been criticized by enemies in parliament.

Shaul Bakhash, a historian of Iran at the George Mason University in the United States, said the reports of bazaar shops pulling down their shutters could mean merchants have lost patience with Ahmadinejad. “Up to now, the bazaar has been a bulwark of support for the state,” he said.

However, the Iranian Labour News Agency (ILNA) quoted bazaar official Ahmad Karimi Esfahani as saying the closure was a safety measure. “The Tehran merchants did not open their shops today because of security concerns. It is not correct that this action was in protest,” he said.

The rial’s losses accelerated in the past week after the government launched an “exchange centre” to supply dollars to importers of basic goods; businessmen say the centre failed to meet demand for dollars.

Websites providing rates for the rial stopped updating on Tuesday, and Dubai money changers said they were not selling it because they had lost contact with their Tehran counterparts.

Reuters: South Korea will buy around 10 percent of...