Any US military action against Iran far off, says Romney 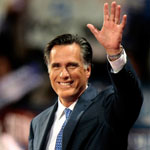 But the Republican presidential nominee did make clear that he supported the same “red line” that Israel’s prime minister has called for — preventing Tehran from acquiring a nuclear weapons capacity.

“My own test is that Iran should not have the capability of producing a nuclear weapon. I think that’s the same test that Benjamin Netanyahu would also apply,” Romney told CNN from Ohio, where he is campaigning in the midst of a rise in the polls following his strong debate performance against President Barack Obama last week.

“Let’s also recognize that we have a long way to go before military action may be necessary,” Romney said. “And hopefully it’s never necessary.

“Hopefully, through extremely tight sanctions, as well as diplomatic action, we can prevent Iran from taking a course which would lead to them crossing that line.”

Obama has consistently drawn the line on not allowing Iran to acquire a nuclear bomb, a distinct difference from Netanyahu’s line on achieving weapon “capacity.”

The West and Israel accuse Iran of seeking to develop atomic weapons under cover of a civilian program, a charge which Tehran denies.

Asked how he would react as president if Israel launched an attack on Iran, Romney suggested he would expect to be notified in advance of any Israeli initiative.

“We have Israel’s back, both at the UN but also militarily,” Romney said. “I would anticipate that if I’m president, the actions of Israel would not come as a surprise to me,” adding that he would want to meet with Netanyahu in Israel as part of his first trip abroad.

Romney insisted there was “great hope and real prospects for dissuading Iran from taking a path that leads into a nuclear setting,” but such an outcome would require “real strength on the part of America.

“And it’s also going to require us showing no daylight between ourselves and Israel,” he added.

Romney on Monday accused Obama’s presidency of causing a “dangerous situation” with strained ties with Israel, and said Iran’s nuclear program has “never posed a greater danger to our friends, our allies, and to us.”

By Jubin Katiraie An Iranian man has pled guilty...