Bloomberg: Ohio Republican Senator Rob Portman criticized the idea of direct U.S. talks with Iran about its nuclear program. “The last thing we would want to do is abandon our allies on this and to make it a one-on-one negotiation,” he said.

By Margaret Talev and Michael Riley 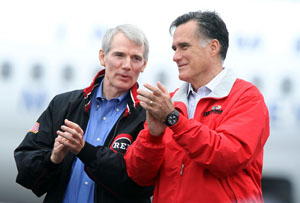 “The last thing we would want to do is abandon our allies on this and to make it a one-on-one negotiation,” Portman, an adviser to Republican presidential nominee Mitt Romney, said yesterday on NBC’s “Meet the Press.”

Portman was responding to a New York Times story saying the U.S. and Iran had agreed to direct negotiations for the first time, a report that was later denied by the White House.

Iran has been a flash point in U.S. foreign policy and will probably come up when Romney and Democratic President Barack Obama meet for their third and final debate on foreign policy tonight in Boca Raton, Florida. Portman is coaching Romney for the debate.

Tommy Vietor, a spokesman for the National Security Council, said there is no plan to meet with Iranian officials after the Nov. 6 U.S. presidential election. Iran’s Foreign Minister Ali Akbar Salehi said yesterday there are no plans for direct talks. Israeli Prime Minister Benjamin Netanyahu said yesterday Israel knows nothing about any U.S. talks with Iran.

“If it’s accurate, it sounds like the U.S. is taking a position that we’re likely to jettison our allies,” Portman said of the Times report, which ran yesterday at the top of the paper’s front page.

Eileen Murphy, a spokeswoman for the New York Times, didn’t immediately reply to an e-mail asking if the paper stood by the story in light of the White House denial.

Romney has criticized Obama’s approach to dealing with Iran, which the U.S. suspects is developing nuclear weapons capability. Romney has called for a tougher line on Iran, including the imposition of stiffer sanctions than the president has set and the restoration of permanently stationed aircraft- carrier task forces in the region.

Senator Lindsey Graham, a member of the Senate Armed Services Committee, said the U.S. should demand access to information about Iran’s nuclear program rather than engaging in one-on-one talks with the country’s government.

The South Carolina Republican said sanctions have failed to stop Iran from pursuing its nuclear program and Iran is taking advantage of the U.S. election cycle to push for talks.

“I think the time for talking is over,” Graham said on “Fox News Sunday.”

Democratic Senator Dick Durbin of Illinois, his party’s second-ranking Senate leader, said on the Fox program that the U.S. should be open to talks.

“If direct negotiations are a path to peaceful negotiations with Iran giving up on its nuclear aspirations, then do it,” Durbin said.

Senator Marco Rubio, a Florida Republican and Romney supporter, said on NBC that he wouldn’t comment on the report since the White House had denied it.

The U.S. remains prepared to meet bilaterally with Iran, Vietor said in an e-mailed statement Oct. 20 denying the Times report, which was published online late in the day.

“It’s not true that the United States and Iran have agreed to one-on-one talks or any meeting after the American election,” Vietor said in the e-mail. “The president has made clear that he will prevent Iran from getting a nuclear weapon, and we will do what we must to achieve that.”

The Times reported that the Iranian government has insisted that any talks take place after the election so they know who they’d be negotiating with.

Since April (APR), the U.S., France, the U.K., China, Russia and Germany — a group known as the P5+1 — have pursued three rounds of diplomacy in an effort to persuade Iran to abandon illicit aspects of its nuclear program. The P5+1 — a term for the five permanent members of the United Nations Security Council plus Germany — is the channel for talks and negotiations are continuing, Salehi told reporters in Tehran yesterday.

While the international community has stepped up pressure on Iran by imposing dozens of financial and oil sanctions this year, the talks have so far failed to achieve a settlement.

The Obama administration has said the sanctions have been biting into Iran’s economy.

Oil output in Iran, previously the second-biggest producer in the Organization of Petroleum Exporting Countries after Saudi Arabia, has sagged to 2.63 million barrels a day in September from 2.85 million barrels in August, the International Energy Agency said in a report on Oct. 12.

Iran’s rial has lost more than half of its value against the dollar in street trading in the past two months.

Next step on Iran