Reuters: A Russian-built nuclear reactor in Iran was shut down last month to limit any damage after stray bolts were found beneath the fuel cells, a Russian nuclear industry source said on Friday. By Steve Gutterman 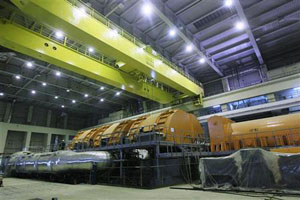 MOSCOW (Reuters) – A Russian-built nuclear reactor in Iran was shut down last month to limit any damage after stray bolts were found beneath the fuel cells, a Russian nuclear industry source said on Friday.

The explanation for the shutdown of the 1,000-megawatt Bushehr plant contradicted assurances by Iran that nothing unexpected had happened and removing nuclear fuel from the plant was part of a normal procedure.

“Indicators showed that some small external parts were … in the reactor vessel,” said the source, identifying them as bolts beneath the fuel cells.

The West suspects the Islamic Republic of trying to develop nuclear arms. It denies the accusations, and its first plant near the Gulf city of Bushehr is a symbol of what it says are it’s purely peaceful nuclear ambitions.

The U.N. nuclear agency said in a confidential November 16 report that fuel assemblies – bundles of fuel rods loaded into the reactor – had been transferred from the reactor core to a spent fuel pond in October, but gave no reason.

It was the second time in less than two years fuel has been unloaded from the reactor, which Russian state nuclear corporation Rosatom said in late August had been powered up to full capacity.

Rosatom subsidiary NIAEP which runs the project said in October Bushehr would be formally “handed over for use” to Iran in March 2013. Officials had earlier expected this to happen by the end of 2012.

In a written reply to questions, NIAEP said “unscheduled additional tests and checks, as well as repair work on equipment and systems” had been carried out at the plant.

NIAEP said the reactor would be at full capacity again in late December and the additional work was behind the delayed transfer of responsibility to Iranian operators.

It has said dozens of Russian specialists will remain at the plant after the handover, which will be a milestone for the project started by Germany’s Siemens before the 1979 Islamic Revolution that toppled the U.S.-backed shah.

U.S. concerns the Bushehr project, which Russia took over in the 1990s, could help Tehran develop a nuclear weapon were eased by a requirement Iran return spent fuel, from which weapons-grade plutonium can potentially be extracted, to Russia.

Bushehr is not considered a major proliferation risk by Western states, whose fears are focused on sites where Iran has defied global pressure and Russian-approved U.N. sanctions by enriching uranium beyond levels needed to fuel power plants.

But Western officials have voiced concern about unloading fuel, saying it raised questions about safety and potentially about proliferation if the fuel were misused. They have also criticized Iran for the secrecy surrounding the operation.

Asked on Thursday about fuel removal from the plant, Iran’s ambassador to the International Atomic Energy Agency said the country was determined to make sure safety was guaranteed after the plant is turned over to Iranian operators.

“We are going to make sure that every item, every part of it is safe before we receive (it) because it will be our obligation afterward,” Ambassador Ali Asghar Soltanieh told reporters at the U.N. nuclear agency in Vienna.

By Jubin Katiraie Amnesty International said in its latest...