Wall Street Journal: In a surprising—and irony-rich—byproduct of the Afghan war, the Pentagon finds itself dependent on a scientific research arm of the Iranian government to treat bites by Oxus cobras, Haly’s pit vipers and other snakes peculiar to the battlefields of southwest Asia. The Wall Street Journal 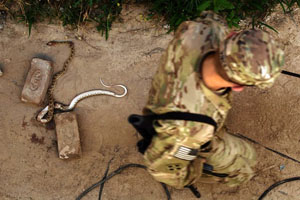 Despite Sanctions, Tehran Provides Treatment for Poisonous-Reptile Bites to Coalition Soldiers in Afghanistan
By MICHAEL M. PHILLIPS and FARNAZ FASSIHI

CAMP LEATHERNECK, Afghanistan—Relations between Iran and the U.S. are poisonous, with one exception: an antidote for snake bites.

In a surprising—and irony-rich—byproduct of the Afghan war, the Pentagon finds itself dependent on a scientific research arm of the Iranian government to treat bites by Oxus cobras, Haly’s pit vipers and other snakes peculiar to the battlefields of southwest Asia.

Despite U.S.-led international sanctions designed to paralyze Iran’s trade with the outside world, the Defense Department buys the drugs through a middleman, with orders totaling 115 vials at $310 apiece since January 2011.

Medical guidance issued by U.S. Central Command says drugs made by Iran’s Razi Vaccine & Serum Research Institute “should be the first line of antivenin therapy” because they counter venoms of the most-common Afghan snakes, said a U.S. officer who has read it.

The U.S. Food and Drug Administration considers Razi antivenin an experimental drug, and requires military doctors to file a report any time the antivenin is used. FDA-approved antivenins won’t work on Afghan snake bites because they are manufactured from snake venom found in U.S. species, say military doctors.

For their part, the Iranians say they are willing to sell Razi drugs to anyone. “We make this to save lives, and it doesn’t matter if the person is Iranian or Afghan or American,” said Hadi Zareh, lead researcher in Razi’s antivenin department. “We are happy to hear we have saved a person’s life, even an American soldier.”

Prompted by questions from The Wall Street Journal, Pentagon lawyers are investigating whether the purchases violate sanctions rules and require a waiver from the U.S. Treasury Department. “We are working with the Department of Defense to confirm the details of these purchases to ensure compliance” with sanctions regulations, a Treasury spokesman said.

Mr. Zareh said the U.S.-led sanctions campaign, intended to discourage Iran from pursuing nuclear weapons, has had the side effect of making it harder for Razi to produce the very drugs the American military is purchasing. The institute, he said in an interview, is finding it “very difficult to buy chemical products for the laboratories and some of the equipment that we need. Prices have also increased because of sanctions.”

There are 13 species of venomous snakes in Afghanistan, many of which are also found in Iran. There is the Oxus cobra, which can be aggressive when protecting a nest. “When biting they hold on and chew savagely,” the Army Public Health Service warns in posters hung around bases in Afghanistan. Haly’s pit viper has hinged, tubular fangs that fold back into its mouth. Untreated, its venom causes pain, blistering, hemorrhaging and “digestion of tissue around the bite wound,” the Army warns. The Levantine viper is “unpredictable, and they may strike quickly and savagely at any time,” the Army says. Saw-scaled vipers are “extremely short-tempered” and, though they will usually slither away from a confrontation, “have been reported to chase victims aggressively.”

“If a patient comes in and I don’t know the snake they got bit by, I’d give them Razi,” said Lt. Col. Aatif Sheikh, the military’s top pharmacist at Bagram Airfield, a major U.S. base outside of Kabul.

The Army warning posters encourage troops to practice “snake-smart” behavior, including shaking out bedding and clothing before use. The posters feature arms, feet and hands black with flesh turned necrotic by venom.

Doctors say in the case of a serious bite, it is urgent to provide treatment within an hour to avoid tissue breakdown. Other effects include hemorrhaging, facial drooping, double vision and paralysis, leading in severe cases to respiratory failure and death.

Razi was founded in 1924 to make vaccines for livestock, operating under the Iranian Ministry of Agriculture. More than three decades later, researchers branched out into antivenins to treat injuries from snakes and scorpions. Razi, a respected organization with ties to the World Health Organization, makes about 95,000 ampoules of snake and scorpion antivenin a year. It is currently researching an antidote for spider bites.

The institute used to keep tangles of snakes on site. Now it has a catch-milk-and-release policy. A Razi team extracts the venom and then releases the snakes to keep up the wild population, Mr. Zareh said.

Technicians inject a tiny dose of the venom into one of the institute’s 200 horses. The horses produce antibodies in their blood, which the technicians then refine into antivenin. U.S.-made antivenins won’t work in Afghanistan because they aren’t made from Afghan species.

The pharmacy at British-run Camp Bastion hospital, adjacent to the Camp Leatherneck U.S. Marine base in southern Afghanistan, stocks Indian and French antivenins, as well as Razi drugs.

“The Iranian antivenin is the best, and our guys deserve the best,” said Col. Rob Russell, the hospital’s medical director.

Col. Russell says among the 9,500 British troops in Afghanistan, just a few suffer snake or scorpion bites each year.

“A lot of the guys who get bitten have been [messing] with a snake,” he said. U.S. military doctors in Afghanistan have administered 21 doses of Razi antivenin since January 2011, all of them to Afghan children, say military records. The drug is usually administered via a saline drip. The children survived.

American military doctors urge soldiers to try to identify the offending reptile, as safely as possible. “If the snake is dead, they’re welcome to bring the snake with them,” said Lt. Col. Sheikh, the pharmacist. “But don’t go chasing the snake.”

AFP: Iranian authorities said on Monday they have formally...