AP: Four children of an influential ex-Iranian president are suing a radical lawmaker for describing his family as a corrupt “octopus,” heating up a struggle between hard-liners and moderates simmering since a contested 2009 election.

By By ALI AKBAR DAREINI 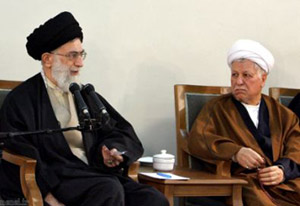 TEHRAN, Iran (AP) — Four children of an influential ex-Iranian president are suing a radical lawmaker for describing his family as a corrupt “octopus,” heating up a struggle between hard-liners and moderates simmering since a contested 2009 election.

The latest salvo has rekindled the bitterness between backers of the current president, Mahmoud Ahmadinejad, and moderates headed by the former leader, Akbar Hashemi Rafsanjani, just six months ahead of the next presidential election.

A lawyer filed the complaint for the family in the Special Clergy Court against the lawmaker, Hamid Rasai, an ally of Ahmadinejad. Rasai is also a cleric.

“Four children of Ayatollah Rafsanjani have registered their lawsuit against Rasai with the Special Clergy Court. I think Rasai will be summoned to the court within the next 10 days,” said lawyer Mahmoud Alizadeh Tabatabaei, according to the semiofficial ISNA news agency.

In a speech broadcast on state radio, Rasai called one of the ex-president’s sons, Mahdi Rafsanjani, a “corrupt monster who has always enjoyed ironclad immunity.”

Rasai urged the judiciary to deal with him harshly, calling Rafsanjani and his relatives an “octopus family” that pressured judiciary and security bodies to free Mahdi.

Mahdi Rafsanjani was released from Evin prison on bail earlier this month.

Authorities arrested him in late September, a day after he returned to Iran from Britain, on charges of fomenting unrest in the aftermath of Iran’s disputed 2009 presidential election. He has not been put on trial.

Many analysts believe Ahmadinejad won the 2009 vote partly because he portrayed himself as a champion of the poor and called Rafsanjani a symbol of aristocracy. He also called Mousavi a protege of Rafsanjani.

In recent months, there are indications that the 78-year-old Rafsanjani, who favors a more moderate approach to the West, might try to make a political comeback.

Iran’s judiciary rejected Rasai’s statements, calling a large part of his remarks “sheer lies.” In a statement, it said Rasai’s remarks were “criminal” and must be dealt with by the court.

Rafsanjani’s family provided a written response to Rasai, which was posted on Rafsanjani’s website Wednesday.

“It is expected that the respected Special Clergy Court, should it finds these remarks a kind of encroachment on the position of others, will take legal action … because no one has the right to attribute crimes to a defendant who has not been sentenced in a competent court,” the family said in its letter.

Reuters: Iran will hold a second round of talks...