Reuters: Some of the contraband is spirited across the mountains in Pepsi bottles carried by child smugglers. Yet more is loaded into pick-up trucks or siphoned into barrels and strapped onto mules. By Hamdan Albaloshi 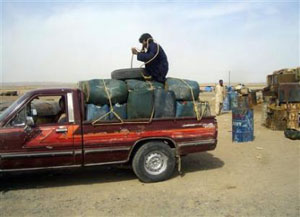 JOGAR, Pakistan (Reuters) – Some of the contraband is spirited across the mountains in Pepsi bottles carried by child smugglers. Yet more is loaded into pick-up trucks or siphoned into barrels and strapped onto mules.

So lucrative are the returns that even seasoned opium traffickers are abandoning their traditional cargo to grab a share of Pakistan’s closest thing to an oil boom: a roaring trade in illicit Iranian diesel.

As Western powers tighten sanctions on Iran, an unexpected set of beneficiaries has emerged in the hard-scrabble Pakistani province of Baluchistan – smugglers lured by surging profits for black market fuel.

“Why smuggle opium when you can earn as much money by smuggling diesel? It’s much safer,” said a former opium trader from the Pakistani town of Mand, a smuggling hub near the Iranian border.

“Besides, I’m now called a successful businessman — not a drug dealer,” said the man, who gave his name as Hamid.

Diesel smuggling has long been a part of the illicit trade in Baluchistan, where a thriving commerce in goods from guns and narcotics to duty free cigarettes and second hand Toyotas constitutes one the arteries of the globalised criminal economy.

But a Reuters inquiry into the fuel trade, based on interviews with participants across the province and a visit to remote parts of the frontier, has revealed that sanctions on Iran has made diesel smuggling extremely remunerative.

The findings also raise questions about the possible degree of complicity in fuel smuggling among Pakistani security forces stationed in Baluchistan, a vast province sandwiched between Iran and Afghanistan.

Covering almost half of Pakistan’s land area but extremely sparsely populated, Baluchistan is home to both insurgents campaigning for an independent Baluch homeland, and drug cartels shipping Afghan opium and heroin to world markets.

In Nushki, a small town on one of the roads cutting through Baluchistan’s arid moonscape, diesel traders preparing to drive to the Iran border had little to fear from the law.

“Bringing in fuel this way is so much cheaper and makes great profits,” said one of the transporters, a burly man wearing a gold watch who had the demeanor of a wealthy businessman. “Even though there are security check points at all these border towns inside Pakistan, no one ever stops me. Why wouldn’t I do this?”

For years, diesel smuggled from Iran has supplemented the 2.7 million to 3 million tons (20 million to 22 million barrels) of diesel that Pakistan’s state oil company buys from the Kuwait Petroleum Corp each year.

The illegal trade cooled in late 2010 when Iran cut fuel subsidies, narrowing profit margins for importers. But smugglers have gone into overdrive since late September, when growing pressure from Western sanctions caused the Iranian rial to lose forty per cent of its value against the dollar in a week, making diesel even cheaper for Pakistani buyers.

Iran sets its diesel price at 4,500 Iranian rials a liter, (about 15 U.S. cents at the open market rate) – less than the price of mineral water. In Pakistan, a liter of smuggled diesel can sell for 104 rupees a liter ($1.06) — cheaper than the official price of 112 rupees a liter.

In Baluchistan, diesel dealers are making so much cash that some passenger transporters are trading in buses to buy pick-up trucks sturdy enough to make the journey to the frontier across river fords and forbidding escarpments.

“I sold my mini-bus to buy a pick-up. It earns me twice as much as the passenger van,” said a man called Altaf, who has started ferrying Iranian diesel to the town of Turbat in Baluchistan.

At Jogar, a border pass in granite mountains, children trek across the hills bearing Iranian diesel in Pepsi bottles. Some is transported on donkeys. On the Baluchistan coast, smuggling proceeds on an industrial scale as diesel arrives at ports via vessels plying the Gulf of Oman.

Like tributaries feeding a river, individual smugglers bring their barrels to depots, where the cargo is aggregated into tanker trucks.

There is no way to reliably measure the amount of fuel involved, but traders believe that 100-130 tankers — each capable of carrying 25,000-40,000 liters — are filled with illicit Iranian diesel in Baluchistan each day.

The tankers then deliver the fuel to markets across Pakistan, or into Afghanistan, whose reliance on Iranian refined products poses a particular dilemma for Washington.

In January, the U.S. Special Inspector General for Afghanistan Reconstruction warned that fuel purchases made for Afghan security forces using U.S. government funds may have included Iranian petroleum products, which would be a violation of Washington’s own sanctions on Tehran.

Iran’s attempts to boost formal energy ties with Pakistan are also a concern for the U.S. government. Washington has voiced opposition to plans to build a pipeline through Baluchistan to tap Iranian natural gas, which Pakistan sees as a possible answer to its chronic electricity shortages.

The ease with which diesel smuggling has blossomed anew underscores the tenuous writ of the authorities in Baluchistan, a region with a long history of independence that has felt marginalized ever since it was merged into Pakistan in 1948.

So large are the sums involved that many suspect elements in the paramilitary Frontier Corps, which has primary security responsibility in Baluchistan, and other agencies are involved.

“The Frontier Corps, coast guards and police provide the smugglers with protection in return for their share,” said a senior government official in Makran, a southern coastal strip in Baluchistan and smuggling hotspot.

The Frontier Corps declined comment, but has in the past denied involvement in illegal trade, saying it has repeatedly confronted heavily armed heroin traffickers.

“Vehicles loaded with Iranian diesel and petrol provide us with fuel as a routine matter — there are no hindrances to its transportation,” said Ghulam Ali, who sells the smuggled products openly in Quetta, the main city in Baluchistan.

Akbar Baloch, who runs an import and export business from a village near the Iran border, said influential figures on both sides of the frontier were involved. “Their armed henchmen escort the vehicles used for smuggling,” he added.

Iran’s government, already battling Western moves to restrict supplies of gasoline and other refined products, has sought to stem smuggling by introducing a system of smart cards to ration subsidized fuel.

In Pakistan, authorities admit they are overwhelmed. Ibrahim Vighio, a senior customs official in Quetta, said the government plans to form a new 1,000-strong anti-smuggling unit. “We have lack of forces, proper weapons and equipment to stop the smuggling,” he said.

(Additional reporting by Gul Yousufzai In QUETTA and; Jessica Jaganathan in SINGAPORE, Writing by Matthew Green; Editing by Raju Gopalakrishnan)

Reuters: The U.S. Congress agreed on Saturday to extend...

Supreme Leader: Iran will not back down from nuclear rights