AP: A 6.1 magnitude earthquake killed at least 37 and injured hundreds more in a sparsely populated area in southern Iran on Tuesday, Iranian officials said, adding that it did not damage a nuclear plant in the region. The Associated Press

By By NASSER KARIMI 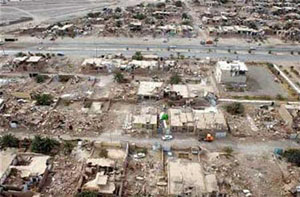 TEHRAN, Iran (AP) — A 6.1 magnitude earthquake killed at least 37 and injured hundreds more in a sparsely populated area in southern Iran on Tuesday, Iranian officials said, adding that it did not damage a nuclear plant in the region.

The report said the earthquake struck the town of Kaki some 96 kilometers (60 miles) southeast of Bushehr, a town on the Persian Gulf that is home of Iran’s first nuclear power plant, built with Russian help.

“No damage was done to Bushehr power plant,” Bushehr provincial governor Fereidoun Hasanvand told state TV. He said 37 people had died so far and 850 were injured, including 100 who were hospitalized.

The plant’s chief, Mahmoud Jafari, confirmed the site’s condition to semi-official Mehr news agency, saying that it is resistant to earthquakes of up to magnitude eight.

Water and electricity were cut to many residents, said Ebrahim Darvishi, governor of the worst-hit district Shonbeh.

The UN’s nuclear watchdog agency said on its website that it had been informed by Iran that there was no damage to the plant and no radioactive release and, based on its analysis of the earthquake, was not seeking additional information. The International Atomic Energy Agency statement indicated that it was satisfied there was little danger.

Shahpour Rostami, the deputy governor of Bushehr province, told state TV that rescue teams have been deployed to Shonbeh.

Three helicopters were sent to survey the damaged area before sunset, said Mohammad Mozaffar, the head of Iran’s Red Crescent rescue department. He said damage was particularly bad in the village of Baghan.

Kaki resident Mondani Hosseini told The Associated Press that people had run out into the streets out of fear.

Dozens of aftershocks have been reported by the official IRNA news agency since the earthquake, which occurred at 16:22 local time, 11:58 GMT.

The quake was felt across the Gulf in Bahrain, the United Arab Emirates and Qatar, where workers were evacuated from high-rise buildings as a precaution.

Earlier on Sunday a lighter earthquake jolted the nearby area. Iran is located on seismic faults and it experiences frequent earthquakes.

In 2003, some 26,000 people were killed by a 6.6 magnitude quake that flattened the historic southeastern city of Bam.

In Russia, the head of the state agency responsible for the Bushehr project said the reactor was not producing fission by chain reaction when the tremor occurred.

“Personnel at the station are continuing to work in a normal regime, the radiation conditions are within the norms of natural background,” Igor Mezenin was quoted as saying by the ITAR-Tass news agency.

AP writers George Jahn in Vienna and James Heintz in Moscow contributed to this report.

AFP: Iran has banned an award-winning young actress from...