AFP: Bahrain on Wednesday said it has found an Iranian drone in the kingdom’s north near Saudi Arabia and called for increased cooperation between regional security services to face “threats” from Tehran. 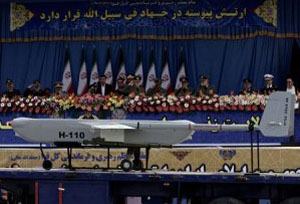 DUBAI (AFP) — Bahrain on Wednesday said it has found an Iranian drone in the kingdom’s north near Saudi Arabia and called for increased cooperation between regional security services to face “threats” from Tehran.

The unmanned aircraft “was found in the sea in north Bahrain, mainly between Bahrain and Saudi Arabia, two weeks ago,” government spokeswoman Samira Rajab told AFP.

“It has been proved that this is a drone used by Iran and could be linked to the Iranian spy cells discovered in Saudi Arabia and Bahrain,” said Rajab.

It was unclear if the aircraft had crashed or was brought down in the area.

Iran says it is developing drones to be used for surveillance as well as for attacks.

On Tuesday, Iran’s rival across the Gulf, Saudi Arabia, said its authorities have arrested 10 more suspects in an alleged Iranian spy ring unveiled two months ago. Iran has denied links to the cell.

And last month, a Bahraini appeals court confirmed a 10-year jail term handed over to one of its citizens accused of spying for Iran’s elite Revolutionary Guards.

Bahrain’s Interior Minister Sheikh Rashid Al-Khalifa, meanwhile, urged in a statement carried by the official BNA news agency on Wednesday for “further cooperation and collaboration between security services in the region and with friendly states to face these threats” by Iran.

He also criticised Iran’s “interference in internal security affairs of countries in the region”.

Sunni Muslim Arab monarchies of the Gulf have long had strained ties with Iran, a predominantly Shiite country. These deteriorated further in early 2011 after a Saudi-led military intervention crushed Shiite-led pro-democracy protests in Bahrain, also run by a Sunni dynasty.

Bloomberg: Sasol Ltd. is concerned that the U.S. may...