Wall Street Journal: Iran is taking advantage of the confusion surrounding Yemen’s transition of government to gain a new foothold in the country, Yemeni and Western officials say, as Tehran seeks military allies operating near one of the world’s most strategic waterways for oil shipments.
The Wall Street Journal 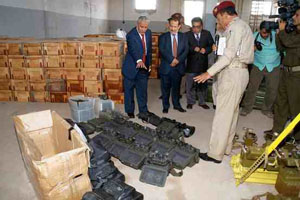 SAN’A, Yemen—Iran is taking advantage of the confusion surrounding Yemen’s transition of government to gain a new foothold in the country, Yemeni and Western officials say, as Tehran seeks military allies operating near one of the world’s most strategic waterways for oil shipments.

Iran is training militants who are aligned with a separatist movement in southern Yemen, while Iran’s Lebanese proxy, Hezbollah, is providing some funding and media training to the group, people familiar with the situation say. Iran has also directed arms, including heat-seeking missiles, toward these militants, Yemeni and Western officials say, citing intelligence reports.

The outreach comes as Tehran has sought to bolster its influence in a region reshaped by two years of uprisings. A tie to Yemeni militants could provide Iran with a strategic pressure point—one akin to its alliance with Hezbollah in Lebanon, just across the border from Tehran’s avowed enemy Israel.

An expanded roster of Yemen-based allies would give Tehran a lever against the U.S., which relies on Yemen’s government as both a hedge against Iran and a partner against al Qaeda-linked militants in Yemen. Iran could also turn to clients in Yemen as Syria’s war poses an existential threat to one of Tehran’s biggest regional allies, the Damascus government of President Bashar al-Assad.

“If the south of Yemen were to break away and become an ally of the Iranians, it would be a major strategic gain for Tehran,” said Bruce Riedel, a senior fellow and director of the Brookings’ Intelligence Project, part of the Brookings’ Institute. “It might more than compensate for the loss of Syria if Assad’s government falls.”

Iran didn’t respond to several requests to comment to its United Nations mission. Hassan Rohani’s recent election as Iran’s president isn’t expected to affect Iran’s policies toward proxy groups such as Hezbollah, as such relationships are overseen by elite units of Iran’s Republican Guard, under the control of Supreme Leader Ayatollah Ali Khamenei.

Tehran’s latest overtures, according to the Western and Yemeni officials, are directed at members of Hirak—a political movement that seeks to divide Yemen along the southern and northern states that existed before they unified in 1990. While Hirak is made up primarily of Sunnis, it finds common cause with the Shiite Tehran in opposing Yemen’s government in San’a. Iran has worked to militarize elements within Hirak for nearly two years, these officials say.

Hirak’s power base is a geopolitically strategic territory in southern Yemen that lies alongside part of Bab al Mandab, a narrow strait traveled by many giant oil tankers bound for the U.S. and Europe. Bab al Mandab—Arabic for Gate of Grief—is so named for the treacherous journey through waters just 18 miles wide at points.

Security is a concern at Bab al Mandab, which stands, along with the Suez Canal and the Strait of Hormuz, as one of the world’s major oil-supply choke points. Yemen’s national security forces and its coast guard have been strained since the country’s revolution took root in 2011.

“If the Iranians are able to control Bab al Mandab and the Strait of Hormuz, they’d be able to have a chokehold on the global economy,” a Western diplomat in San’a said.

Iran’s moves in Yemen would represent a new challenge to the U.S., which in recent years has multiplied its financial support for Yemen’s impoverished government in San’a. Last year, the U.S. provided $350 million to San’a, according to the Congressional Research Service, up from roughly $26 million in 2008.

About half of the aid is in the form of military assistance, U.S. officials say.Tensions between the U.S. and Iran have increased as Washington has boosted sanctions over Iran’s nuclear program. Iran threatened to cut shipping passage in the Strait of Hormuz last year as the European Union and U.S. proposed sanctions targeting Iran’s oil industry and central bank. Those sanctions helped cut Iranian oil exports to a 26-year low. U.S. Congress is considering further sanctions that would further target Iran’s ailing oil industry—reducing its exports to 200,000 barrels of oil per day, down from the roughly 1.2 million barrels a day it currently exports.

With its own exports, which also go through the Strait of Hormuz, falling dramatically, Iran may be less hesitant to target shipping lanes, say some officials. “With the new bill, they’d have nothing to lose,” said a Western official familiar with oil security

Iran’s recent threats to shipping have appeared to be little more than saber-rattling. But Tehran has used its navy as an instrument of intimidation in the Strait of Hormuz for two decades, including strikes against vessels in the area in the late 1980s. At Bab al Mandab, even rocket-propelled grenades, notorious for their poor aim, could heighten fear that could drive some oil tankers away, said Mr. Riedel and the Western official.

A Yemeni investigation concluded that “these weapons were loaded onto [a] vessel in Iran and were intended for armed insurgents,” the U.S. State Department said in a February statement. The arms are the most sophisticated to be intercepted en route to Yemen.

Citing intelligence reports, the Yemeni and Western officials said they suspect the arms were bound for Hirak as well as the Houthis, a militant movement in Yemen’s north that has long-standing ties to Iran.

Yemeni officials say they have recently seen more sophisticated weapons reach the Houthis, such as rocket-propelled grenades. But the January attempt to arm the Houthis and Hirak, they say, would have introduced surface-to-air missiles to down aircraft flying above the Arabian Peninsula and allowed the groups to create powerful homemade bombs, both new capabilities.

“Yes, most Yemenis are armed, but with Kalashnikovs. But surface-to-air missiles and antitank mines Yemenis [citizens] don’t have,” said Ali Mohsen al Ahmar, a senior defense adviser to Yemen’s president. “These sophisticated weapons are only in the hands of the Houthis and Hirak.”

Officials for both groups, while not addressing the alleged arms shipment, said some elements of their groups had chosen to arm themselves out of frustration with San’a.

The Houthis and Hirak have sent hundreds of fighters to Iran for training, Mr. Ahmar added.

Hirak officials admit their movement is fracturing as its leaders focus on gaining independence through referendums while some armed factions turn to Iran to arm themselves for the struggle. Militants seeking training in Iran are acting on their own, these Hirak leaders say.

“Some Hiraki youth have gone to Iran for training. They got tired of our promises and sought the funds and training to fight the northern occupation,” said Qassem Askar, Hirak’s secretary-general. “And senior leaders [from Hirak] went to the Houthis for weapons about a year ago, and we warned them to stop.”

Hezbollah has also provided some funding to Hirak’s leadership and given media training for Hirak’s antigovernment TV station, Aden Live, which is broadcast into Yemen from Beirut, said Mr. Askar.

Hirak’s point man for this cooperation is the former president of South Yemen, Ali Salim al Beidh, according to Western and Yemeni officials. Based in a Hezbollah-stronghold of Beirut, Mr. al Beidh fled Yemen after launching a failed secession attempt in 1994, resulting in civil war.

Mr. al Beidh denied that he serves such a role or that there is any military collaboration between leaders of Hirak, Iran and Hezbollah.

Mr. Askar said he met Iranian, Hezbollah and Houthi leaders in Beirut last year while visiting Mr. al Beidh, in talks hosted by Hezbollah. But shortly after, when asked whether those talks addressed military cooperation, Mr. Askar denied the meeting had taken place.

A Hezbollah spokesman didn’t respond to requests for comment.

Iran, meanwhile, is also deepening its ties with the Houthis, a Shiite insurgency based in northern Yemen. According to Western and Yemeni officials, the elite Iranian Revolutionary Guard Corps is enlisting Hezbollah to foster Houthi armed factions.

“The Iranian Revolutionary Guards oversee the training [of Houthis] in southern Lebanon and manages and organizes the training by Hezbollah,” Yemen’s Minister of Information, Ali Ahmed al Amrani, said in an interview, an assessment shared by Mr. Mohsen, the presidential defense adviser.

Hezbollah has also sent military trainers to Yemen to support the Houthis, the Western diplomat in San’a said.

Ahmed Bahri, a leader of the Haq party, which represents the Houthis, says he has traveled to Beirut to meet with Hezbollah officials and Hirak leaders as recently as December and was planning another trip in “a few weeks.”

He said the Houthis, like Hirak, have turned to Iran only after Yemen’s government ignored their grievances.

“We are protecting our interests. The former [Yemeni] regime is the one that forced Houthis and Hirak to take up arms. They are the ones that forced the Houthis to Iran and Hezbollah… that forced us to look for another backbone,” he said in an interview in his home between mouthfuls of qat, a mild stimulant widely used in Yemen.

This month, the Yemeni government returned the remains of Hussein al Houthi, the founder of the Houthi movement, to his family, as a goodwill gesture in a bid to revive national reconciliation talks. Mr. al Houthi was killed by government forces in 2004 and his remains were buried in San’a to prevent them from becoming a shrine for the movement.

At this month’s burial, Houthi supporters wore the uniform of the Iranian Revolutionary Guards, seen as a brazen antigovernment message that spooked some officials in San’a.

Iran is also working with the Houthis to bolster its support for Mr. Assad, according to Houthi leaders, who said its supporters are signing up and making the journey to fight alongside government forces in Syria.

Iran’s activities may also figure into the current civil war in Syria, where Mr. Assad, a close Iranian ally, has made recent strategic gains but remains under heavy pressure.

“Iran could use Hirak and Houthis to fall back on Yemen if Syria no longer is available to them. Syria is strategically much more important to the Iranians,” said the Western diplomat. “But any port in a storm.”

—Hakim Almasmari and Rima Abushakra contributed to this article.

U.S. scrambles to help Iraq fight off militants as Baghdad is threatened

New York Times: The chaotic situation in Iraq showed no...