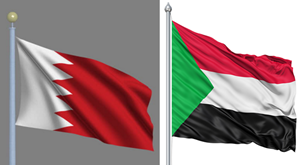 Bahrain and Sudan announced Monday they are severing diplomatic ties with Iran, one day after ally Saudi Arabia announced it was cutting ties with Tehran.

The move ramps up tensions in the region after Iranian protesters set fires at the Saudi Embassy over the weekend, in response to the Saudi execution of a prominent Shiite cleric.

Saudi Arabia went even further Monday by suspending all flights to and from Iran.

Bahrain has accused Iran of being behind a low-level insurgency that has been operating since 2011 protests against its Sunni rulers by the majority Shiite population. The U.S. Navy’s 5th Fleet is based on the tiny island kingdom.

The United Arab Emirates also said it will downgrade diplomatic ties with Iran and reduce the number of Iranian diplomats in the UAE, the official WAM news agency reported.

The country’s ambassador to Iran, Saif Al Zaabi, was summoned home from Tehran, the UAE’s Ministry of Foreign Affairs said in a statement carried Monday by WAM.

“This exceptional step has been taken in the light of Iran’s continuous interference in the internal affairs of Gulf and Arab states, which has reached unprecedented levels,” the statement said.

On Sunday, Iranian diplomats and staff were given 48 hours to leave Saudi Arabia.

The increased tension comes after the Sunni-led Saudi government executed Sheik Nimr al-Nimr, a beloved cleric among Shiite Muslims known as a voice for free Saudi elections during the Arab Spring protests. He was among 47 people executed Saturday by Saudi Arabia. Most of those killed were Sunnis linked to al-Qaeda attacks in the kingdom. Al-Nimr was among four Shiites who were executed.

News of his death set off an outcry across much of the Muslim world. Angry protesters in Shiite-dominated Iran set fires at the Saudi Embassy in Tehran.

In Washington on Monday, White House Press Secretary Josh Earnest urged all sides to “show restraint and to not further inflame tensions that are on quite vivid display in the region.”

Earnest acknowledged closer U.S. ties to Saudi Arabia than to Iran, but he appeared to assign blame to both camps. He cited Saudi Arabia’s history of mass executions, a lack of due process and “the unfair targeting of religious minorities or political opposition figures,” and he criticized Iran’s failure to protect the Saudi Arabian embassy.

Russia said Monday that it is ready to act as a mediator between Saudi Arabia and Iran, the Russian state news agency RIA Novosti reported, citing an unnamed diplomat. It is unclear if Russia has made an offer to mediate to either side.

By Jubin Katiraie Numerous reports have been published in...