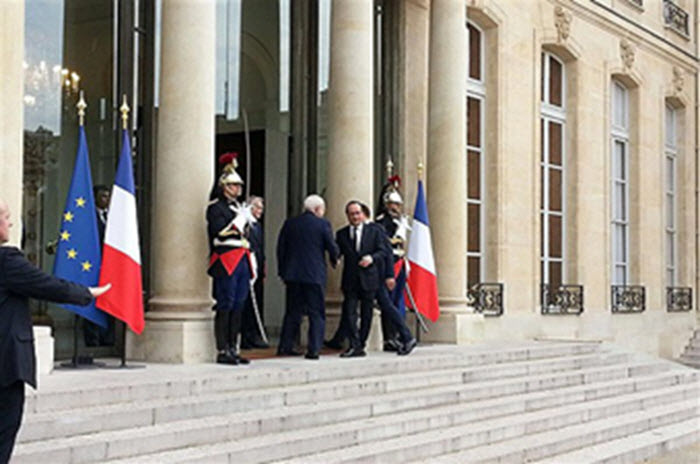 London, 22 Jun – The Iranian Resistance has condemned the Iranian Foreign Minister’s visit to Paris and The Hague.
They say that Mohammad Javad Zarif is an instrument of the repressive regime, which routinely crushes human rights, democracy and peace in the country and the Middle East.

There have been over 2,400 executions in the three years since President Hassan Rouhani took office in Iran; nearly 1,000 in 2015 alone. The U.N. Special Rapporteur for 2014-15 stated that the execution rate of juveniles has reached the highest for five years.

The state has increasingly cracked down on freedom of expression for the press and the citizens, continued nuclear missile tests in spite of UN resolutions, and oppressed religious and ethnic minorities like the Kurds, Arabs, Baluchis, and Sunnis.

They’ve dispatched thousands of the Iranian Revolutionary Guards Corps and even Afghan refugees to fight in the Syrian civil war supporting Bashar-al Assad.
Back in May, Zarif praised Mustafa Badreddin, a senior commander of the terrorist Hezbollah who died fighting for the Assad regime in Damascus. He called him a “great and tireless man… full of love, sensation and epic in defending the rightful causes of Islam.”

The National Council of Resistance of Iran said: “Zarif cannot distance himself from the regime’s fundamental functions through various pretexts such as the existence of different factions inside the regime, and as a result flee from his responsibilities regarding the regime’s crimes inside Iran and abroad.”
They demanded that foreign powers hold him accountable for the regime’s actions and that Iran is forced to improve human rights before any more trade negotiations are made.

On June 19, the regime’s Supreme leader Ali Khamenei commented on the spate of protests, the government have faced in the past few months.
He said: “The universities have turned into platforms for divergence from the meanings and values of the revolution… anyone who challenges the establishment under any pretext such as elections is an uncertain individual and has no qualification to appear in the universities.”

If the illusion of a ‘moderate’ Iran was not already quashed, the appointment of Ahmad Jannati to the head of the Assembly of Experts, ought to be the final nail in the coffin.

Jannati, who was already chair of the ultraconservative Guardian Council is a hard-line extremist and a criminal, best known for his loyalty to Khamenei.