Iran: 95 Arrested by Cyber Police for Activities in Social Media this Year 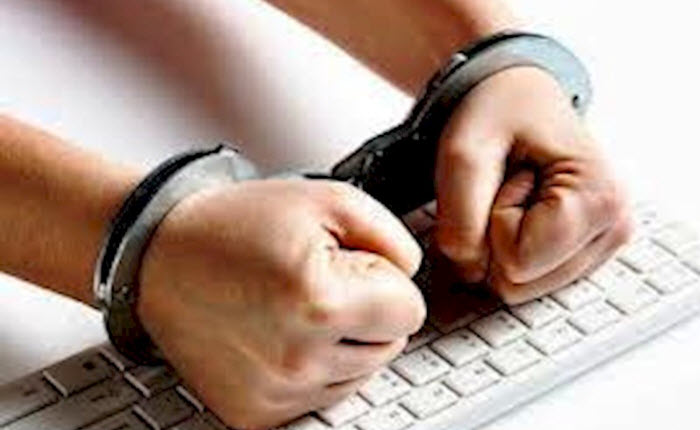 London, 24 Aug – On August 23, the National Council of Resistance of Iran (NCRI) reports that several youths have been arrested, allegedly for internet crimes, according to Commander of Ardabil’s Internet Police, FATA.

Hafez Sharifi said, “In the past year, more than 95 people were arrested in this area. We opened the files for the convicts and they were turned in to the judicial authorities.” He added, “The average age of those arrested is between 19 and 27.”

Sharifi states that they are trying to prevent “a number of criminals” from going wild on the internet, and that the force has “complete knowledge of the cyber space”.

“Although dissemination of falsities, insults and accusations comprise the larger share of violations in this area, but we are monitoring the cyber space 24 hours a day to gain full knowledge and prevent such immoralities from taking place.”

A 15-year-old boy who had tried to launch a channel in virtual social networks, was arrested by the Cyber Police (FATA) in May. Jahangir Karimi, a police commander of the regime in Isfahan, central Iran, announced that, “After the final investigation, the 15-year-old teenager from Isfahan was identified quickly and summoned to the police.” Karimi’s remarks were broadcasted on May 26 by the official website of the IRIB.

The most notorious case that the Iranian regime’s Cyber Police (FATA) are responsible for is that of blogger Sattar Beheshti, who was killed under torture in November 2012.

The head of the FATA police in Gilan Province, Colonel Iraj Mohammadkhani, recently announced that “[illegal] production, distribution and access to any data, software or any type of electronic devices are regarded as computer crimes and anyone committing such acts will be sentenced from 91 days to one year of imprisonment, or will have to pay a fine of five million to 20 million Rials (U.S. $166 to $662), or both.”

Shahin Gobadi of the Foreign Affairs Committee of the National Council of Resistance of Iran (NCRI) previously said, “Freedom of the press and freedom of expression are non-existent in Iran under the mullahs’ regime. Not only does the regime severely clamp down on journalists for reporting on subjects considered sensitive by the mullahs, it even goes so far as arresting and torturing to death dissident bloggers such as Sattar Beheshti.”

The regime, earlier this year announced that it had set a one-year deadline for international social media, in particular Telegram, to hand over data on their Iranian users. The official state news agency IRNA reported that the decision was made at a session of the Supreme Council of Cyberspace, a committee that serves as the regime’s IT regulator, headed by President Hassan Rouhani.