Does Iran’s Lobby have the Trump Administration in its Sights? 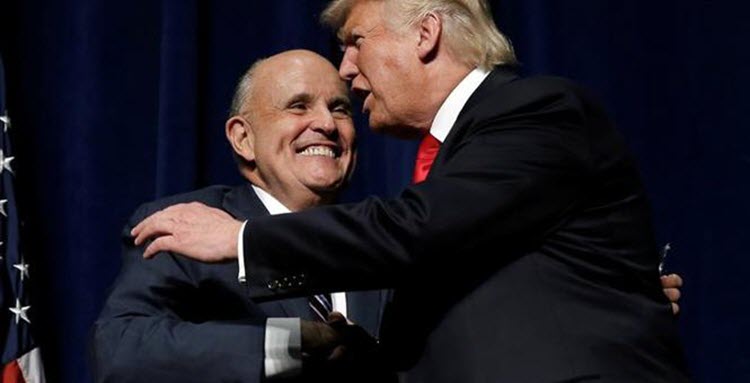 London, 1 Dec – In his article for Town Hall on November 30, Ivan Sheehan, Professor of Public and International Affairs, co-Director of the Global Affairs and Human Security graduate program in the School of Public and International Affairs, and Director of the graduate program Negotiation and Conflict Management at the University of Baltimore, discusses the attacks on Iranian dissidents by Tehran’s well-organized Washington lobby.

While Donald Trump’s White House transition in full swing, Daniel Benjamin’s article in Politico Magazine, Giuliani Took Money From a Group That Killed Americans. Does Trump Care? and Josh Rogin’s piece in The Washington Post, Giuliani was Paid Advocate for Shady Iranian Dissident Group seem to be smears that have fallen flat.  If they were designed to influence the selection of key members of the president-elect’s cabinet and, by extension, US policy, the they should have been substantiated by actual evidence. As they stand, the articles are not credible and they traffic in innuendo.

He wrote the foreword to an independent 2013 study undertaken by Ambassador Lincoln P. Bloomfield Jr. a former defense and foreign policy official who served three presidents over five administrations in the Pentagon, White House, and State Department.  This study addressed the misinformation campaign directed at Western government policies toward the Iranian opposition group. Bloomfield produced the study to challenge conventional wisdom within the Department of State and to prompt fresh policy thinking.

Sheehan writes, “The US Department of State did not add the MEK to its list of Foreign Terrorist Organizations (FTO) until 1997. The purported basis was the killings of six American military personnel and defense contractors in Iran in the early 1970s. The State Department would later allege that the MEK played a key role in the February 1979 occupation of the US embassy in Tehran and that after fleeing to Paris, and then Iraq in the early 1980s, it conducted terrorist attacks inside Iran. Such claims, never verified with credible open-source terrorism incident data, were formally debunked by French judicial review.”  He adds, “Two years later, in 1999, the United States went a step further by alleging that the National Council of Resistance of Iran (NCRI), a political organization made up of several Iranian opposition groups that reject clerical rule, was a front for the MEK and designated it too as a terrorist group.”

Then Assistant Secretary of State for Near East Affairs, Martin Indyk, indicated that the State Department added the National Council of Resistance (NCR) as an alias for the Mujahedin-e Khalq (MEK) because “The Iranian government had brought this to our attention. We looked into it and saw that there were good reasons for designating the NCR as an alias for the MEK.” The United Kingdom (UK) and European Union (EU) followed suit, putting the MEK/PMOI (though not the NCRI) on their terror lists.

However, the evidence demonstrated that the US military officers and contractor killings that brought about the original designation, was not carried out the MEK, but instead, by a secular hard-left splinter group.

Besides having no proof that the MEK played a role in the 1979 embassy takeover; and that the armed resistance carried out by the MEK from Iraq was directed at official regime targets, not innocent civilians, this was all happening while their relatives and sympathizers were being jailed, tortured and executed en masse.

There is also good evidence that Iran lobbied hard to get the United States and other Western governments to baselessly designate the MEK as terrorists. The day after the MEK was added to the U.S.’s FTO list, the Los Angeles Times reported, “One senior Clinton administration official said inclusion of the People’s Mojahedeen was intended as a ‘goodwill gesture’ to Tehran and its newly elected moderate president Mohammad Khatami.”

Five years later, the same official told Newsweek, “[There] was White House interest in opening up a dialogue with the Iranian government. At the time, President Khatami had recently been elected and was seen as a moderate. Top administration officials saw cracking down on the [PMOI/MEK] – which the Iranians had made clear they saw as a menace, as one way to do so.”

Similar political considerations operated across the Atlantic, In an interview with BBC Radio in 2006, Jack Straw, then British Foreign Secretary, admitted that the UK designation of the MEK in 2001 was specifically issued in response to demands made by the Iranian regime.

Supporters took their case to courts. Their efforts met with strong resistance.  By 2006, seven European courts had ruled that the group did not meet lawful criteria for terrorism. They also ruled that the terrorist designation should have been moot after 2001, when the group’s leadership began to focus on a political and social campaign to bring about democratic change in Iran. In the United States, where the courts similarly ruled repeatedly in favor of the MEK, and as many as 200 members of Congress signed statements endorsing its cause. America’s second highest court granted the writ of mandamus filed by the MEK, and ordered the Secretary of State to take action or it would delist the group. Secretary Hillary Clinton revoked the designation in September 2012.

It is curious that Mr. Benjamin, who was forced by the high courts, in his capacity as the Department of State Coordinator for Counterterrorism, to remove the MEK from the FTO list, would re-visit this now.

Benjamin and Rogin’s old and discredited claims arrive as President-Elect Trump’s advisors try to identify a Secretary of State, which will have a direct influence on US Iran policy.

Might there be a need for Washington to undertake a counterintelligence investigation of Iran’s influence campaign in the US? Would such an investigation implicate prominent former US officials and journalists doing the bidding of Washington’s pro-Iran lobby.

AFP: Britain has ordered the closure of the Iranian...