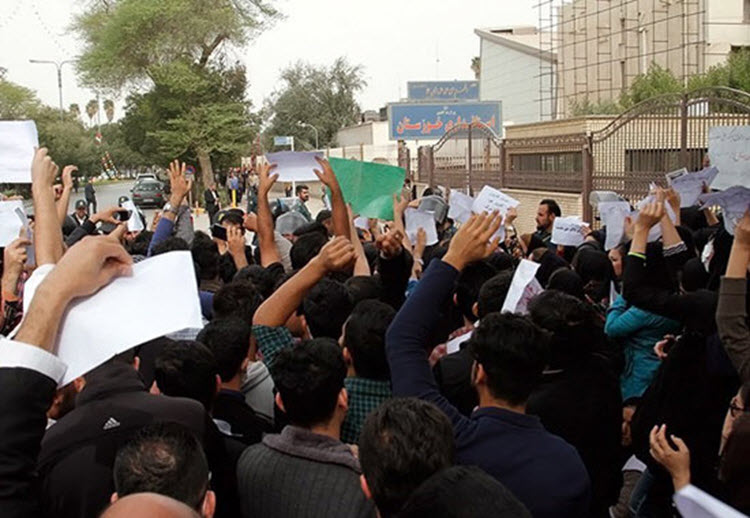 London, 18 Feb – Repeated periods of asphyxiating dust storms, lately accompanied by crippling power and water supply cuts, have aggravated public protests in the city of Ahvaz, southwestern province of Khuzestan, over past week.

Holding up placards saying “don’t kill Khuzestan”, “Ahvaz in blackout”, “Karun River is dead” and asking for their right to breathe in a clean air along with people wearing masks, the crowd of dissenters demonstrated their opposition towards the city current situation.

“I’m just a worker and [doctors] had to take out fluid from my chest twice due to the dust filling my lungs,” said one of the protesters. “My grandchild, wife and I are all suffering from respirational infections; when the storm hits the city we have to shut the windows and draw the blinds and can’t leave the house for some days and we feel like prisoners who live in small and dark cells,” said another protester.

“Once the storm strikes Ahvaz becomes like a haunted city, we don’t have access to phone or internet due to power cut and we can’t get any news,” another citizen whined.

It’s been years that dust storms sweeping across western and southwestern Iran has disrupted life in an unmatched fashion, closed down schools and government offices, brought flights to a standstill and provoked protests. Choking dust is reported to be 66 times above the healthy level as the storm break in the city.

Although some of the dust storms instigate from hotspots located in Iraq some believe that despite what Department of Environment claims about Hour-al-Azim wetland refurbishment the wetland is almost dried up due to the oil extracting activities in the region and is responsible for the recurrent dust storms.

In Brief: In the Iranian capital and elsewhere