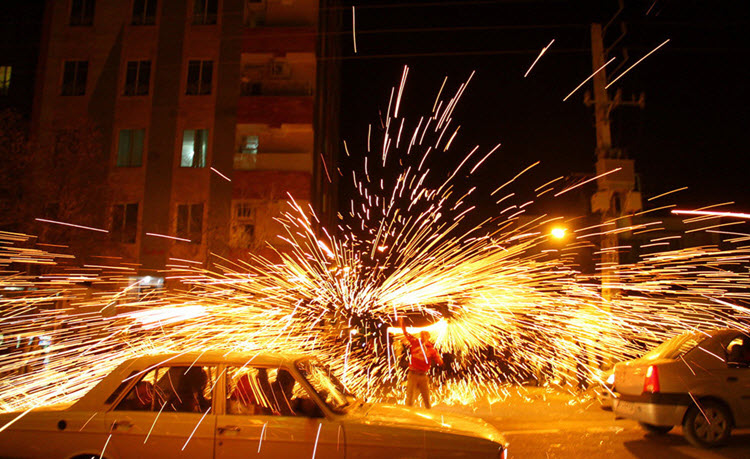 London, 15 Mar – The Iranian people held Fire Festival Ceremonies across various cities, on March 14, in which they burnt pictures of the Supreme Leader, ridiculed politicians, and chanted anti-Regime slogans.

The militant security forces attempted to stop people from holding a political protest during the festival but they were held off by protesters. The Regime effectively turned a celebration into a battlefield.

Mostafa, a taxi driver in Isfahan said: “Despite the authorities’ efforts to stop this festival by scaring the people of [the risk of] fire to the buildings and themselves, nobody is listening and people are by all means ignoring mullahs’ measures to stop the festivities.”

Even prisoners became involved. In retaliation to being locked inside Gohardasht Prison, Tehran, without even a breath of fresh air, prisoners lit fires inside the hallways to jump over, while chanting ‘death to the dictators’.

A member of the Regime’s Parliament said that they considered the celebration to be “dangerous”, while the Supreme Leader Ali Khamenei issued a fatwa forbidding such celebrations. They printed brochures encouraging people not to attend fire celebrations and threatened to arrest those who attended.

However, it is not the fireworks that the Regime is scared of; far more terrifying to them is the spirit of rebellion within the Iranian people which, unlike fire, cannot be doused.

The Festival of Fire is held at the end of the Iranian calendar year, in a similar to New Year’s Eve for people in the West.

AFP: Iran plans to triple its capacity to purify...