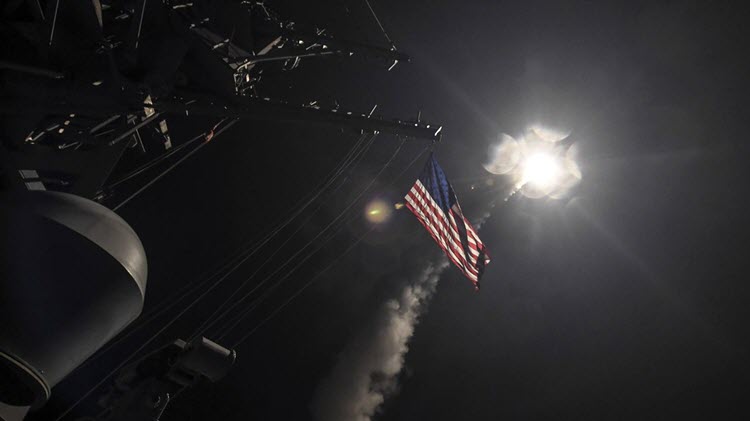 London, 9 Apr – U.S. allies have been praising U.S. President Trump’s missile strikes on a Syrian military base. Trump ordered the strikes soon after the horrifying news that civilians in Syria were the target of a chemical weapons attack.

More than 70 people died as a result of the attack – many of whom were women and young children.

Two U.S. Navy vessels were sent to launch Tomahawk missiles on the military airbase where the chemical attack was launched.

Israel, the United Kingdom, Saudi Arabia and Australia praised his decision to act.

The White House has since announced that it is looking into the involvement of Russia following claims that it played a role in the recent attack. Although there is no evidence to say Russia was involved, a senior official said that “at a minimum, Russia failed to reign in the Syrian regime”.

On Thursday evening, President Trump said he wanted all “civilised nations” to join the U.S. in “seeking to end the slaughter and bloodshed in Syria.” He said that “no child of God should ever suffer such horror” and that the attack caused a “slow and brutal death for so many”. He added that sanctions are currently being prepared against Syria.

Syrian allies Iran and Russia have been angered by Trump’s move and Russia said it was ending contact with the U.S. regarding airstrike operations in Syria.

U.S. officials have blamed Russia for the attack saying that it had a responsibility to enforce the 2013 deal that obliged Syria to give up its chemical weapons.

The U.S. ambassador to the United Nations, Nikki Haley, said that Russia is responsible for the attack because Syrian dictator Assad was able to carry out the chemical attack knowing that he would be backed by Russia.

Malcolm Turnbull, the Australian Prime Minister, applauded Trump’s decision to launch the strikes, saying that it was a “calibrated, proportionate and targeted response”. In a joint statement, German Chancellor Angela Merkel and French President Francois Hollande laid the entire blamed on Assad.

The U.K. ambassador to the U.N., Matthew Rycroft, said that Russia should learn that “backing a war criminal comes with its own consequence: humiliation”. He said: “Russia sits here humiliated by its failure to bring to heel a puppet dictator propped up by Russia itself and Hezbollah and Iran.”

Javad Zarif, the foreign minister of Iran, an Assad ally, said on Twitter: “Iran condemns use of all WMD by anyone against anyone”. In the 1980s Iran was subjected to a chemical weapon attack by Iraqi dictator Saddam Hussein. However, he said that claims the Syrian government is behind the chemical weapons attack are “bogus”.

PRNewswire: The U.S. families of thousands of Iranian ...