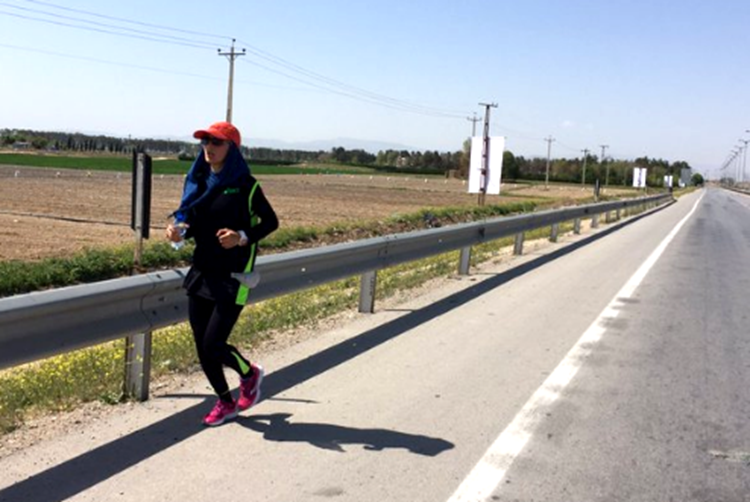 Before the race took place, Straten had said that he was disappointed that female runners were required, according to an Iranian government official, to compete in a separate race at a stadium away from the male runners. Majid Keyhani who is in charge of the country’s track and field federation announced during this rule earlier in the week.

Straten said: “As an organiser, I did not accept that. Female runners had 10K route outside the stadium with same start and finish as male race.”

However, a group of women decided to defy the orders to compete in a separate race and ran alongside the male runners for the full 42km course. One of these women was Wu Juan, a Chinese runner.

Technically this small group of women broke the law in the Islamic Republic because women are not allowed to compete beside men. This has been enforced in the country since the 1979 revolution. Men are even forbidden from watching men compete and vice versa.

Although these women took a large chance by competing alongside the men, they still adhered to the strict dress code that requires them to cover their whole body with the exception of their hands, feet and face. Men were of course permitted to wear normal running clothes such as shorts and t-shirts with short or no sleeves.

Whether these brave women will be punished by the authorities remains to be seen.

Stating his disproval of the obligations for women to run separately from men, Straten said that he is looking for ways to improve the situation for women runners in the country.

Despite the women of Iran calling for more rights with regards to sport, even to be spectators, they are still oppressed by the Iranian regime, and in particular with regards to dress codes.

This is perhaps the reason why very few Iranian women chose to enter the marathon. It was reported that out of 600 Iranian entrants to the marathon, only 156 of them were female.

It was also reported that around 160 runners from abroad, 50 of which were women, applied to join the race. However, a number of these runners were unable to participate because of visa procurements leaving them unable to enter the country.

In April last year, Straten has organised a race in Shiraz, southern Iran. Women were completely banned, but two protested against this decision by participating in the race anyway. They were Masoumeh Torabi and Elham Manoocheri and it seems like they escaped punishment.