How Social Media Poses a Threat to Iran’s Sham Elections 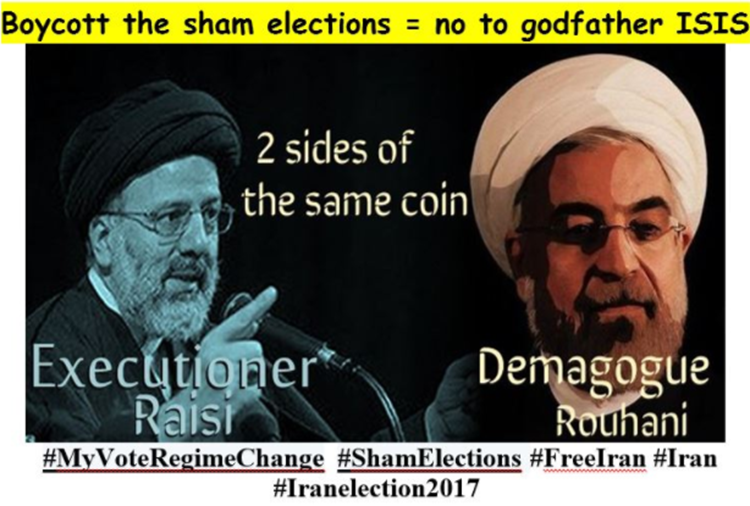 London, 15 May –  Iranian youth have found ways to circumvent the social media restrictions within their country in order to express their discontent with the Iranian elections to the world, using the slogans “Iranian people’s vote is [for the] overthrow of the regime”, “My vote is regime change”, and “death to the principle of velayat-e faqih” .

This is a source of great fear and anger for the Iranian Regime leaders, who have issued many warning against their people using social media and have begun arresting social-media managers within the country.

The Iranian Regime imposes strict controls on the internet within their county, as many dictatorships do, in order to stop the truth about conditions under the Regime from getting out.

This is especially true in the run-up to the elections, which the Regime wants to present to the world as free and fair, as a choice between different candidates, but the Iranian people know that there is no choice at all and they have not been shy about expressing that.

Ordinary Iranians have been sharing the murderous records of the main candidates, like Ebrahim Raisi, a member of the 1988 Death Commissions that sent 30,000 political prisoners (mainly member of the Iranian Resistance group the People’s Mojahedin Organization of Iran (PMOI)) to their deaths, while also questioning incumbent president Hassan Rouhani over his role in the massacre (there is a one month gap in his record which coincides with the massacre), his public calls for more executions during Friday prayers.

• mocked Rouhani’s statement that all Iranians have equal rights by asking: “Such as the legitimate right of one execution every 8 hours?”

• shared the thoughts of former Tehran University Chancellor and political prisoner, Mohammad Maleki, who said: “We don’t have elections in Iran, we have selections”, and “I don’t participate in the election as I don’t see any election”

The actions of these ordinary Iranians could well lead to their arrest, imprisonment, or even death, as speaking against the Regime is illegal. The main social networks used by the Iranian people are Twitter, Instagram, and Telegram as they are harder for the Regime to control.

Supporters of the PMOI have also taken their movement to the streets, hanging banners reading “No to sham elections” or pictures of the President of the Iranian Resistance, Maryam Rajavi, in major cities across the country.

To see some of the best social media posts about the Iranian election and the boycott, visit the National Council of Resistance of Iran.

Iran Focus Tehran, 6 Dec - Amnesty International has called for the...

AFP: The United States said Monday that the detention...