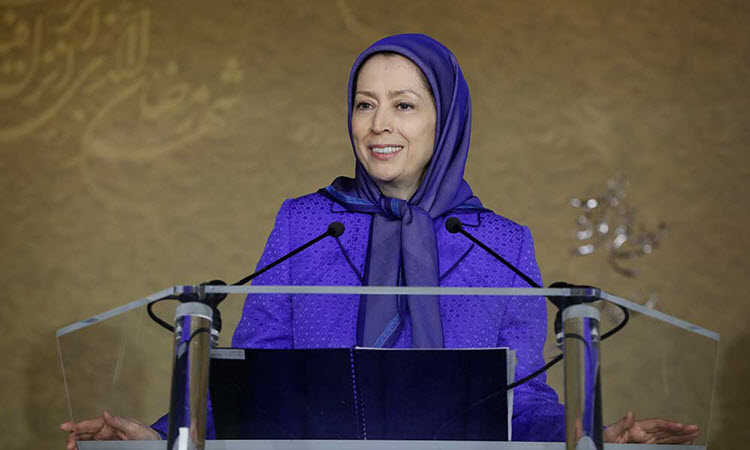 London, 6 Jun – The leader of the Iranian Resistance, Maryam Rajavi, advocated for the expulsion of the Iranian Regime and their terror squad, the Revolutionary Guards Corps (IRGC) from the Middle East in order to achieve peace and stability.

Rajavi made this speech at the Interfaith Solidarity against Extremism gathering on Saturday, June 3, at the central office of the National Council of Resistance of Iran in Auvers-Sur-Oise, which was attended by prominent figures from around the Middle East, including Syria, Yemen, Palestine, Jordan, and Algeria.

She expressed her sorrow at the horrors that plague those affected by the Fundamentalist Regime in Iran, whether they be the Iranian people themselves, the people whose countries they invaded or the people affected by the terrorist acts around the globe that are done by or for the Regime.

She said: “The permanent policy of the regime throughout its rule has been the gross violation of human rights and brutal suppression at home. On the regional level, too, the regime has always sought to dominate the region by invasions and promotion of fundamentalism and sectarianism under the name of Islam.”

Rajavi called on all Muslims and all people in the Middle East to rise up against the brutal Regime, which she referred to as “ the common enemy of all nations in the Middle East” and the “epicentre of belligerence”.

She also called on Muslims around the world to reject the idea of compulsory religion and advocated for secular government, as she has for years.

She said: “The spirit of Islam abhors all forms of compulsion, coercion and forcible prohibition, ranging from imposing the compulsory veil to the forced observation of fasting and prayers by flogging and terror, to preventing the construction of Sunni mosques, and especially to imposing the rule of a government under the name of God and Islam.”

Rajavi advised a three-pronged attack on the Iranian Regime:

1) Designation the IRGC as a terrorist organisation, as is currently under debate in the US Congress

She praised the promising stances adopted by the Arab Islamic American Summit in Saudi Arabia, which labelled Iran as the leading state-sponsor of terrorism in the world.

She said: “This is a stance in the right direction and now it should be able to stop the regime’s belligerence and bloodshed.”

Iran Protests Increase and Spread Across the Country

By Jubin Katiraie Iran saw an increased number of large...

Israelis see no Iran war this year after Netanyahu’s speech