War and Appeasement Are Not Solutions for Iran 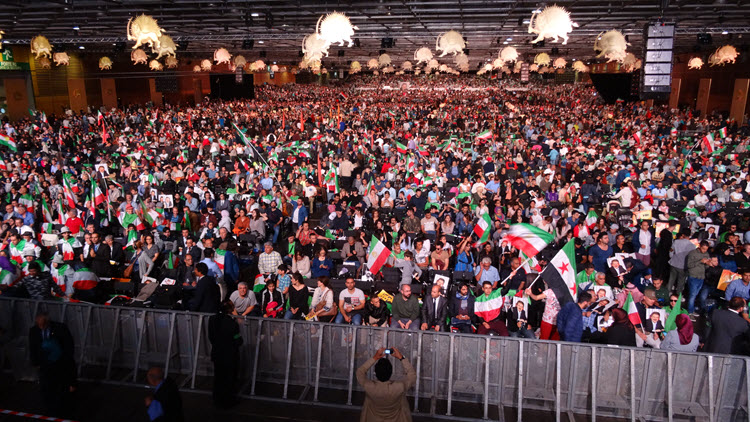 London, 24 Jul – London, 24 Jul – As the Trump White House is reviewing its Iran policy there is increasing support for regime change in Iran, according to an opinion piece on the Forbes website.

Iranian dissident writer Heshmat Alavi, wrote on 24 July that advocates of appeasement toward Iran are boosting their efforts of claiming any firm policy on Tehran will lead to war.

“The question is do the measures professed by this party truly prevent war?”

When Iranian opposition National Council of Resistance of Iran (NCRI) recently held its annual convention in Paris, with Trump “emissaries” such as former New York Mayor Rudy Giuliani and former House Speaker Newt Gingrich speaking powerfully of regime change in Iran, former US ambassador to the UN John Bolton went as far as declaring the Iranian regime will not witness its 40th anniversary in February 2019.

In response, Iran and its lobbies in the West, terrified of such a surge behind the NCRI as the sole alternative able to bring about true change in Iran, have not remained silent, Alavi wrote. “Iran apologists are yet again seen resorting to the old tactic of warning about a new war in the Middle East”.

For decades now pro-Iranian regime writers have cautioned against adopting a firm policy on Tehran, allowing the mullahs’ regime to plunge the entire Middle East into havoc.

As we speak Iraq, Syria and Yemen are in ruins thanks to Iran’s support of proxy elements fueling sectarian conflicts and deadly civil wars.

The war in Afghanistan has yet to finalize after 16 years, and reports continue of Iran supporting the Taliban and al-Qaeda in this country.

Lebanon has yet to witness political stability in decades as Iran continues to funnel millions of dollars and arms to its offspring, the Hezbollah, brought to life by Iran’s Revolutionary Guards (IRGC) back in 1982.

Many other Arab countries can follow suit after Kuwait expelled Iran’s ambassador and more than a dozen other “diplomats” from its soil based on espionage charges.

But of course, the Iran apologists conveniently consider such matters as irrelevant or at best second hand. These very Iran lobbyists are the actual warmongers as their efforts have provided Tehran the opportunity to bring upon utter devastation to all Middle East nations.

Pat Buchanan in a Townhall piece argues, “After Afghanistan, Iraq, Libya, Syria and Yemen, would America and the world be well-served by a war with Iran that could explode into a Sunni-Shiite religious war across the Middle East?”

Neglected here is the passivity encouraged by such Iran-apologists has actually empowered Tehran. The end result has been Iran engulfing Iraq and Syria into a horrific abyss of Shiite militias massacring innocent Sunni civilians.

“800,000 people have been rendered homeless from Mosul alone, millions when you count the refugees who fled from Ramadi and Fallujah. Thousands of innocent Sunni civilians have been killed, and tens of thousands among them were injured,” he wrote in a recent Al Arabiya article.

There is no question that the 2003 Iraq war was a strategic mistake. Yet why do Iran-apologists, again conveniently, neglect another drastic error of Obama prematurely pulling all US troops out of Iraq in 2011? This left the fledgling state of Iraq at the hands of wolves, being Iran, its puppet, former Iraqi prime minister Nouri al-Maliki, and Shiite proxies and death squads.

We simply cannot deny the fact that al-Maliki in Iraq, Bashar al-Assad in Syria, Hezbollah in Lebanon, all supported financially and logistically by Iran, paved the path for the rise of ISIS. They massacred Syria’s Sunnis, parallel to Maliki’s crackdown of the Iraq’s Sunni minority. This allowed ISIS to spread, and first in Iraq and Syria, and thus throughout the Middle East, Europe and beyond.

The regime in Iran actually benefited extremely from the rise of ISIS to claim legitimate its involvement in Iraq and Syria through Shiite proxy groups.

Again, as Iran-apologists across the board in the US and Europe encouraged engagement and rapprochement with Tehran, climaxing unprecedentedly during Obama’s tenure, Iran’s mullahs continued their killing spree across the region.

Looking back at the past several years, one can dare to accuse these Iran-apologists of paving the path for Tehran to legitimize its horrific killing sprees, and causing a horrible number of deaths. Can we not accuse them of warmongering?

These Iranian lobbyists, including Trita Parsi, head of the so-called “National Iranian American Council”, raise the flag of war being bad for business, and thus cheering diplomacy to encourage business. Yet he neglects Iran’s own warmongering in the Middle East.

All said and done, with the Trump administration seriously weighing regime change as policy vis-à-vis Iran, the international community sees before it the opportunity to finally adopt the right policy on Iran.

Engagement has failed. Wars in the Middle East have been disastrous. We do not want to go down that road in regards to Iran. And there is no need.

The Iranian people and their organized opposition, the NCRI, are more than capable of toppling the mullahs’ regime in Tehran. This organization has everything in place and seek only the international community to recognize their struggle and end the disastrous Iran appeasement approach. A course correction vis-a-vis Iran policy regarding is needed, too, in order for the people of Iran and their opposition to take on the rest.

2 dead as Iranian fighter jet crashes in Sea of Oman