Rouhani Is No Moderate in Iran Regime 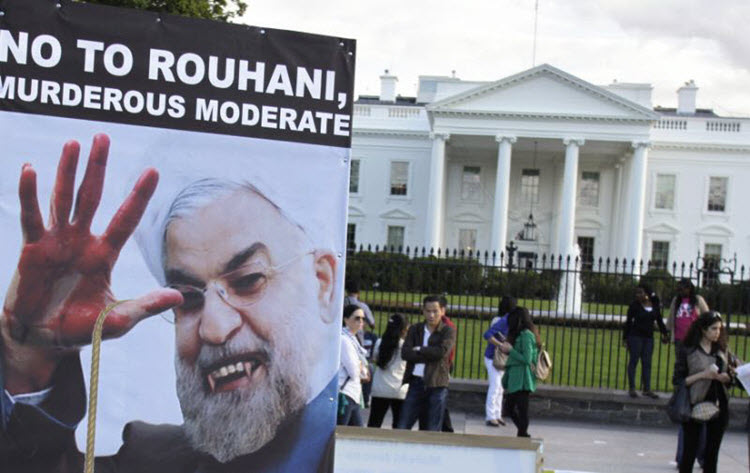 London, 11 Aug – Many in the West have described Iranian President Hassan Rouhani as a ‘reformer’ or ‘moderate’ within the Iranian Regime and even cheered his victory in the sham elections this May.

The academics, media personalities, and even diplomats who like to make this false distinction between moderates and hardliners within the despotic Regime have made the ultimate mistake of judging a politician on his campaign promises rather than his actions once in office.

Yes, Rouhani promised social reform and to release political prisoners when running for office in 2013 but at no part in his four-year tenure has he achieved the reforms that he promised.

There is no reason to suggest that Rouhani is any different from the rest of the mullahs based on his actions.

A report on the American Enterprise Institute for Public Policy Research (AEI ) suggests that Rouhani acts as a “Mr. Fix-it” for the Regime and has been manoeuvred (via rigged elections) or appointed into key positions so that he can fix major problems that plague the mullahs, like the instability of the Regime.

It cites these examples:

• 2013-2015: As President, Rouhani oversaw nuclear negotiations for the second time after Iran Regime was brought to its knees under international sanctions

The AEI report notes that while Rouhani succeeded in easing international pressure against Iran during both nuclear negotiations, it is foolish to believe that he attempted to quell Iran’s aggressiveness or nuclear weapons programme.

Indeed, from a recent address to a gathering of senior Iranian officials and the ambassadors to Iran of several Islamic countries, he appears as committed to the Regime’s military programs, ballistic missile programmes, and nuclear weapons programme as any “hardliner”.

In the address, made alongside current Supreme Leader Ali Khamenei, Rouhani signalled the mullahs’ gratitude to all those involved in the missile programme and gave his endorsement to the missile launch on June 19 from Iran to Syria.

Rouhani certainly does not stray from the official message of the Regime in public and there is no evidence to suggest that he does so in private. There is no ideological difference between him and the rest of the mullahs, so we should stop pretending that there is.

Reuters: In the run-up to its talks with world...