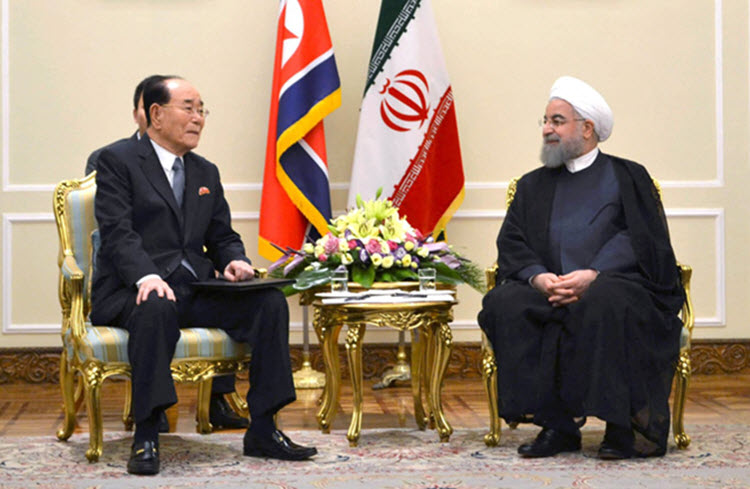 Iranian state media clamoured at the idea that Yong Nam was second only to Kim Jong UN, the country’s leader, in terms of importance but Arash Azizi on The Daily Beast called foul.

Azizi stated that no one can be entirely sure what the power structures are in such a closed-off and isolated state, and assessed that Yong Nam’s powers were mostly ceremonial.

However, this isn’t Yong Nam’s first trip to Iran and Azizi speculates that he could well be responsible for helping build the strong partnership between the two rogue pariah states, which could lead to the Iranian Regime getting hold of nuclear weapons technology that North Korea is currently threatening the world with.

It is indeed likely, as many critics of the 2015 nuclear deal have pointed out, that the Iranian Regime has either struck a deal with the North Koreans to buy nuclear technology from them or that Iran is actually subverting the nuclear deal by developing weapons and missiles within North Korea.

Azizi then used a 2014 report on IranWire by Roland Elliott Brown to illustrate the strange-but-deadly relationship between the isolated states.

Brown reports that the two are linked, in the minds of most Americans, because of President George W. Bush 2002 State of the Union speech in which he declared both nations to be part of the “axis of evil”, along with Saddam Hussein’s Iraq.

He notes that there is clear evidence on a relationship based on trade or opposition to the US between North Korea and Iran dating back to 1979 and their relationship grew strong during the Iran-Iraq War when Iran was desperate for military equipment.

In 2014, Alireza Nader of the Rand Corporation argued that Iran and North Korea are not true allies and that they are more trading partners forced to do business with each other because of economic isolation.

Indeed, Brown wrote: “A relationship that once thrived on friendship farms and mutually admiring founding leaders looked, in the twenty-first century, like a relic of an era that one party, at least, may hope to leave behind.”

It is worth noting that now, as both countries face the wrath of the Donald Trump administration; they may come together once more to fight their common enemy.

German FM says war not an option in Iran

By Hamid Yazdan Panah This past week, the Kurdish...