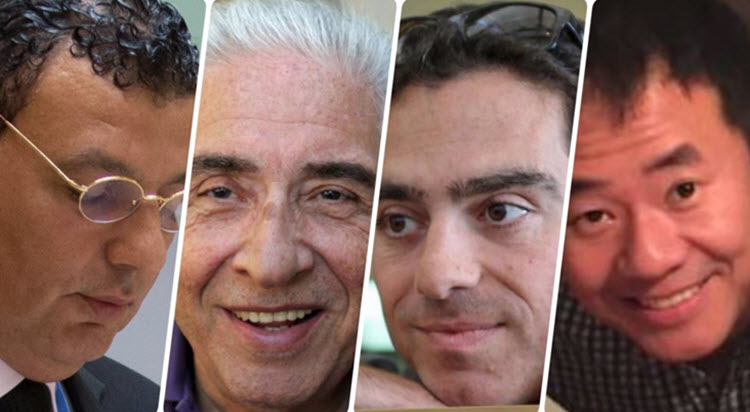 London, 4 Sep – The Iranian Regime has upheld its 10-year jail sentences on four men imprisoned on bogus national security charges including spying on behalf of a foreign government and collaboration against the state.

On Sunday, Tehran’s Prosecutor Abbas Jafari Dolatabadi confirmed that the appeal of the four men (Princeton University student Xiyue Wang, Iranian-American businessman Siamak Namazi and his elderly father Baquer, and Nizar Zakka, a Lebanese citizen with permanent US residency) had been rejected.

Jared Genser, a US-based lawyer for the Namazis, said in a statement last week that their family had already been informed of the appeal’s rejection.
While Princeton University and Wang’s wife, Hua Qu, revealed earlier in August that his appeal had been denied.

Wang, a history doctoral student and US citizen, was conducting dissertation research in Iran in 2016, with the approval of the Iranian Regime, when he was detained and charged with espionage. He was sentenced to 10 years in prison.

Zakka, an information technology expert and a Lebanese citizen with permanent US residency, was invited to Iran by a government official in 2015 when he “disappeared”.

His family later discovered that he’d been arrested for collaborating against Iran. He was sentenced to 10 years in prison and a $4.2 million fine.

Siamak Namazi was arrested for spying while visiting Iran in order to complete a business deal after the lifting of sanctions against the country, and his father was arrested after coming to plead for his release.

Of course, these are not real crimes. These men, and much more foreign or dual-nationals, are being held hostage by the Iranian Regime in order to extort favours from the international community.

In July, Donald Trump warned that Iran would face “new and serious consequences” unless all “unjustly detained” American citizens were released and returned, while a representative for the State Department called upon Iran to release unjustly imprisoned US nationals.

The representative said: “The Iranian regime continues to detain US citizens and other foreigners on fabricated national security-related charges. The safety and security of US citizens remain a top priority. All US citizens, especially dual nationals
considering travel to Iran, should carefully read our latest travel warning.”

Iran added more fuel to the fire that they are keeping these people hostage when Sadegh Larijani, the head of Iran’s judiciary, called for the release of Iranian prisoners from US prisons, and Javad Zarif, Iran’s Foreign Minister, accused the US of holding Iranians on “sanction violations that are not applicable today” even though they were imprisoned when sanctions were in place.

Some have also stated that the reason may be an attempt to resist “Western infiltration” following the listing of sanctions and the supposed influx of foreign investors.

Either way, Iran is holding prisoner innocent people for political gain and it is not acceptable.